Russia has said that if their resolution on transferring humanitarian aid to Syria is rejected, then the political games of other countries will be exposed writes SANA. 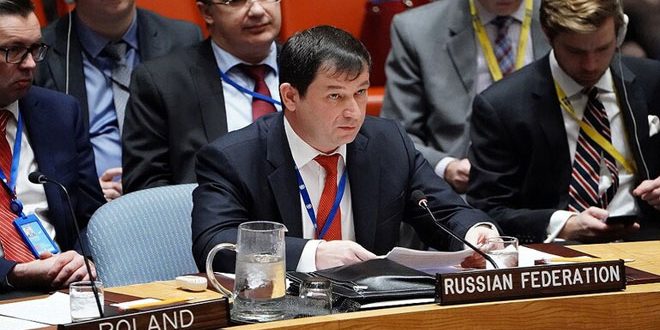 Russia has affirmed that any rejection of the draft resolution on transferring humanitarian aid to Syria, which it will put to a vote at the International Security Council on Thursday, will expose the reality of using the issue of aid by some states as a “political game.”

Russia Today’s website quoted Dmitry Polyanskiy, Deputy Permanent Representative of Russia to the UN as saying on Twitter on Wednesday,” Russia has submitted a compromise draft resolution with regards to humanitarian aid in Syria, and its lack of support by our partners will show that for them, the issue has just been a political game, more than a desire to help the population in Syria.”

On Tuesday, Russia’s Permanent Representative to the UN, Vassily Nebenzia, announced that Moscow will submit a draft resolution at the International Security Council on transferring humanitarian aid to Syria on Dec. 19, 2019.

He added that humanitarian aid must not be transported to Syria without the acceptance of the Syrian Government, affirming that the draft resolution proposed by Germany, Belgium and Kuwait in this regard “isn’t acceptable.”

It is noteworthy that the UN Security Council adopted Resolution No. 2165, which authorized humanitarian convoys heading to Syria to cross the borders, and its validity is extended every year, and this mechanism has existed since July 2014.