10 fighters from the Kurdish-led Syrian Democratic Forces have been killed in a Turkish artillery bombardment near Azaz in northern Syria writes Al-Araby Al-Jadeed. 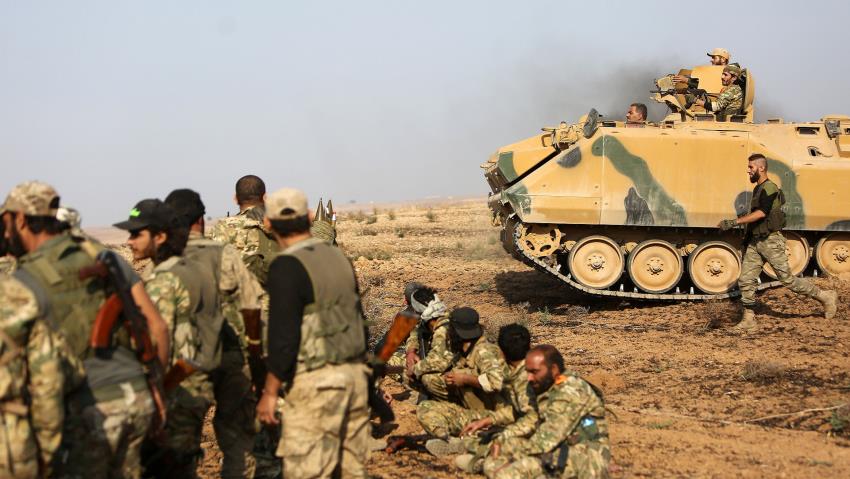 At least 10 members of the Kurdish-led Syrian Democratic Forces (SDF) militia were killed on Saturday after being targeted by Turkish artillery bombardment in northern Syria.

The Syrian news website Bawabat Halab quoted a member of the Turkish-allied “Syrian National Army” (SNA) as saying that Turkish forces on Mount Barsa, north of the city of Azaz, fired rockets and shells at the SDF fighters.

Mount Barsa was captured by Turkey and its SNA allies from Kurdish forces during the “Operation Olive Branch” military operation in January 2018.

The SNA source said that Turkish forces had bombed the SDF fighters after they had been spotted preparing for an attack on an area held by the Syrian National Army northwest of Aleppo.

In northeastern Syria fighting broke out between the SNA and the SDF in Raqqa province after a four day lull.

In October, Turkey launched an invasion to capture areas in northeastern Syria near the Turkish-Syrian border from the Kurdish-led SDF. The fighting ended with a Russian-Turkish agreement which stipulated that SDF forces leave the border area.

However, sporadic clashes between the SDF and the Turkish-backed SNA have continued. On 3 December, 12 civilians were killed in a SDF mortar attack on Azaz.

The recent four day lull in fighting coincided with an agreement to open the vital M4 road from Hassakeh to Aleppo under Syrian regime supervision.

Israel has ramped up attacks on Iranian sites in eastern Syria while Tel Aviv vowed turning Syria into a Vietnam for Iran and to drain Tehran’s forces there, Asharq Al-Awsat reported. Israel’s defense minister warned Iran against its continued presence in Syria, saying Israel will “work tirelessly” to prevent the establishment of a stable Iranian military presence in the war-torn country. “It is no secret that Iran is trying to establish a ring of fire around our country, it is already based in Lebanon and is trying to establish in Syria, Gaza and more,” Naftali Bennett said last week.