At the conclusion of the 14th round of the Astana talks, the guarantor countries have pledged to continue working to ensure the stability of Syria and the elimination of terrorism writes SANA. 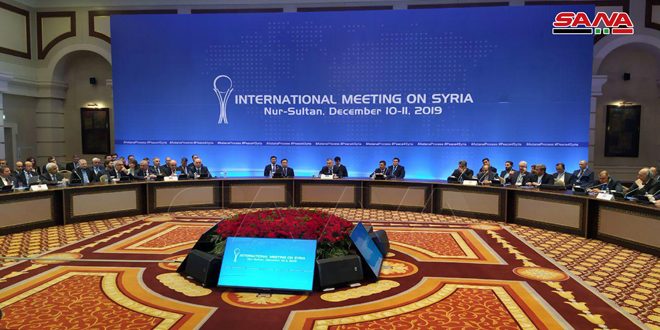 The Astana guarantor states renewed their strong commitment to the sovereignty, independence, unity and territorial integrity of the Syrian Arab Republic as well as to the purposes and principles of the UN Charter and highlighted that these principles should be universally respected and complied with.

In the final statement of the 14th round of Astana talks which was held in the Kazakh capital city of Nur-Sultan, the guarantor states (Russia, Iran and Turkey) affirmed their continued cooperation to eliminate terrorist organizations in Syria and the rejection of separatist agendas that aim to undermine Syria’s sovereignty and territorial integrity.

The statement affirmed the guarantor states’ rejection of all attempts to create new realities on the ground, including illegitimate self-rule initiatives, under the pretext of combating terrorism, and expressed their determination to stand against separatist agendas aimed at undermining the sovereignty and territorial integrity of Syria as well as threatening the national security of neighboring countries.

In their statement, the guarantor states expressed their opposition to the illegal seizure and transfer of oil revenues that should belong to the Syrian Arab Republic.

The statement condemned the continuing Israeli military attacks against Syria, which are a violation of international law and international humanitarian law and undermine the sovereignty of Syria and neighboring countries, as well as endangering the stability and security in the region.

The guarantor states indicated that long-term security and stability in the Syrian al-Jazeera region can only be achieved with the preservation of the sovereignty and territorial integrity of the country, and reaffirmed in this regard the importance of the Adana agreement of 1998.

The statement affirmed the necessity to establish calm on the ground by fully implementing all agreements on Idleb, first and foremost the memorandum of Sept. 17, 2018.

The guarantor states expressed serious concern with the increased terrorist activity in Idleb, which poses a threat to civilians inside and outside the de-escalation area. The guarantors reaffirmed their determination to continue cooperation in order to ultimately eliminate the Islamic State (ISIS) and Jabhat al-Nusra and all other individuals, groups, undertakings and entities associated with al-Qaeda, ISIS and the other terrorist groups as designated by the UN Security Council.

The statement renewed commitment to a viable and lasting Syrian-led and Syrian-owned, UN-facilitated political process in line with UN Security Council resolution no. 2254.

The statement emphasized the importance of the formation and convening of the Constitutional Committee in Geneva on Oct. 30, 2019, as a result of the decisive contributions of the Astana guarantors and the implementation of the decisions of the Syrian National Dialogue Congress in Sochi.

The guarantor states expressed their readiness to support the work of the committee through continuous interaction with its members and the UN Secretary-General’s Special Envoy for Syria, Geir Pedersen, as facilitator, in order to ensure its sustainable and effective work. The guarantor states expressed their conviction that the committee’s work should be governed by a sense of compromise and constructive engagement without foreign interference and externally imposed timelines aimed at reaching a general agreement of its members.

The statement asserted the need to increase humanitarian assistance to all Syrians throughout the country without discrimination, politicization and preconditions. In order to support the improvement of the humanitarian situation in Syria and the progress of the political settlement, the statement called upon the international community, the United Nations and its humanitarian agencies, to enhance the assistance to Syria, inter alia by developing early recovery projects, including the restoration of basic infrastructure assets – water and power supply facilities, schools and hospitals as well as humanitarian mine clearance action in accordance with international humanitarian law.

The guarantor states affirmed in their statement the need to facilitate the safe and voluntary return of refugees and internally displaced persons (IDPs) to their original places of residence in Syria, ensuring their right to return and right to be supported. In this regard they called upon the international community to provide appropriate contributions and reaffirmed their readiness to continue interactions with all relevant parties, including the Office of the United Nations High Commissioner for Refugees (UNHCR) and other specialized international agencies, and they agreed to further discuss the realization of their initiatives to organize an international conference on humanitarian assistance to Syria and the return of Syrian refugees.

The guarantor states decided to hold the next round of Astana talks on Syria in Nur-Sultan in March 2020.