On the sixth anniversary of the kidnapping of four activists, a joint statement has been issued, which calls for truth, justice and accountability writes Zaman al-Wasl. 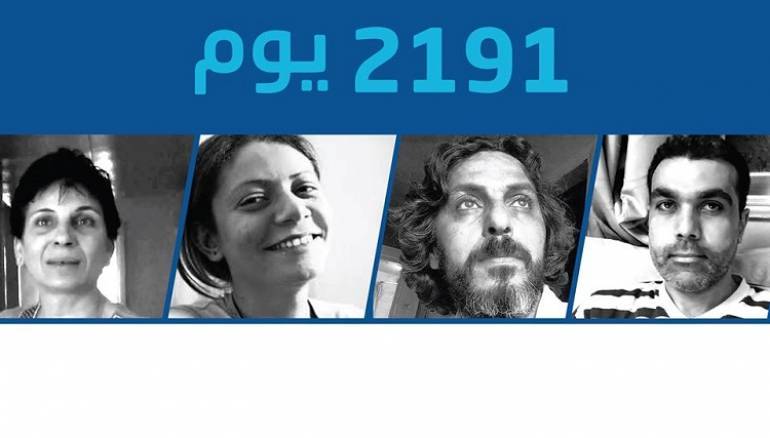 60 Syrian and international NGOs working on human rights and justice and accountability issued a joint statement, marking the sixth anniversary of the kidnapping of four human rights defenders in eastern Ghouta by Jaish al-Islam, who were in control of the area at the time.

On Dec. 9, 2013, a group of masked gunmen stormed the VDC office in Douma, a city near Damascus that was under siege, and kidnapped Razan Zaitouneh along with her husband, Wael Hamada, and their two colleagues, Nazem al-Hammadi and Samera al-Khalil. To this day, their whereabouts remains unknown.

Below is the full text of the statement:

Six years ago, the joint office of the VDC, LDSPS and Rising for Freedom in Douma in Eastern Ghouta (north of Damascus) was raided by armed men who abducted four human rights defenders, Razan Zaitouneh, Wael Hamada, Samira Alkhalil and Nazim Hammadi. The parties controlling the region have changed and tens of thousands of people have been displaced, but the fate of our colleagues remains unknown.

For them and for thousands of forcibly disappeared and detainees in Syria, today, we, the undersigned organizations, renew our commitment to work in every possible way to reveal their fate and defend their rights to justice and accountability. We pledge to fight impunity, as a basic guarantee for building a democratic state based on the separation of powers, the protection of human rights and citizenship, a state governed by law.

As efforts continue to be made to achieve truth, justice and accountability for their abductors and those who perpetrated major crimes against humanity in Syria, the de facto authorities in diverse regions of Syria retain their policies of using forced disappearance and arbitrary detention as their main practice to hide their crimes by committing more crimes. As parties to the conflict continuously keep on marginalizing and making Human Rights Defenders disappear, paths towards a political solution are accelerating.

We remind the parties and guarantors of the political solution negotiations in Syria that revealing the fate of the missing, releasing the detainees, ensuring justice and holding the perpetrators of major crimes against humanity accountable is the best guarantee to end the culture of impunity and lay the first cornerstone for any future stability and peace in Syria and the region.

From here, we, the undersigned organizations, emphasize the following:

We will continue to defend the fundamental rights of all Syrian citizens, seek truth and establish justice and work to hold those responsible for major crimes accountable.

We will continue to pursue the establishment of a transparent, fair and national accountability mechanism with international guarantees that investigate crimes and ensure accountability, reparation, and non-repetition, as only this guarantee will ensure sustainable peace in Syria.

We reaffirm our call on the countries and guarantors involved in the building of a political solution in Syria to face their responsibilities towards producing a political solution that establishes sustainable peace. By giving priority to restoring trust between parties to the conflict, first and foremost we urge those responsible to reveal the fate of the disappeared and detained in Syria, and pressure all parties of the conflict to commit to justice and cooperate.

We call upon the international community and the United Nations to fulfill their responsibilities to defend human rights and work hard to uncover the fate of the missing and detained in Syria and ensure the freedom and safety of human rights defenders in order to ensure the launch of a political process that establishes a democratic state in Syria.