Fighters from the Syrian Democratic Forces have been told to join the Syrian army, so that they can face Turkish aggression writes SANA. 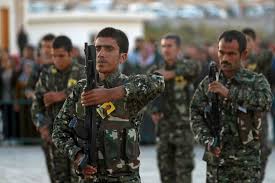 On Wednesday, the Defense Ministry issued a statement in which it announced that the Army and Armed Forces General Command, after establishing control over large areas of the Syrian al-Jazeera region, calls on the groups which are known as “Qasad” to join the army and face the Turkish aggression that is threatening the Syrian territories.

The statement added that, “The Army and Armed Forces General Command is ready to receive the members and the units who are willing to join it from these groups and to settle the status of those who haven’t undertaken compulsory and reserve military service and also those who are wanted.”

The ministry affirmed that, “We in Syria are facing a common enemy, and we must sacrifice as a unified Syrian people, both Arabs and Kurds, to restore every inch of our beloved Syrian territories.”

For its part, the Interior Ministry expressed its readiness to provide all the required services that are related to civilian affairs for all the locals of the Syrian al-Jazeera region whose circumstances have prevented them from obtaining these services.

In a statement on Wednesday, the ministry affirmed that it will receive whoever wants to join the Internal Security Forces.

Meanwhile the Education Ministry affirmed in a statement its readiness to handle the educational status of the students in the Syrian al-Jazeera region and to compensate them for what they have missed of their educational attainment.

The ministry said, “Due to the military and security situations which the Syrian al-Jazeera region has suffered from, and has prevented students from following their educational attainment, the ministry expresses its full readiness to handle the educational status of the students and would compensate them for what they missed. The students will obtain their certificates after taking exams according to the regulations and laws.”