During the opening speeches of the constitutional committee, the head of the Syrian government's delegation warned foreign powers not to interfere with its work writes SANA. 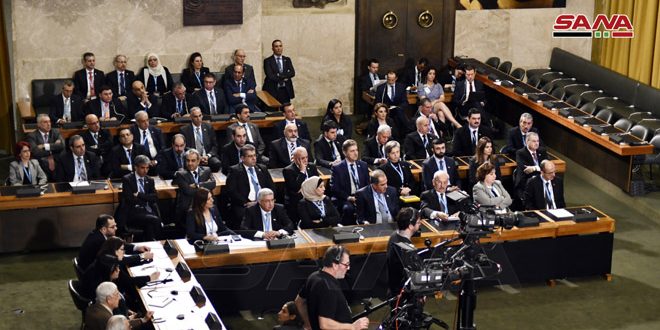 The head of the delegation supported by the Syrian Government, Dr. Ahmad al-Kizbari, affirmed that only the Syrian people have the exclusive right to decide the future of their country, stressing a rejection of any form of foreign interference in the work of the constitutional committee, which must be based on the principles of Syrian sovereignty and territorial integrity.

During the opening speeches of the constitutional committee on Wednesday, Kizbari said that the Syrian people have resisted a fierce war that has been waged on them for nine years, and they are still achieving victories over terrorism.

He added that members of the committee are required to use their best efforts to make the committee a success, as it is one of the entrances to the political track for resolving the crisis in Syria, indicating that a resolution cannot be achieved without a strong will, determination, sincere faith and by working hard to preserve Syria’s unity, sovereignty and independence, and guaranteeing the rights of its people and the strength of the Syrian state.

He pointed out that Syria, which presented the first alphabet to the world, renewed its constitution eight times until reaching its current constitution, which was approved and adopted by popular referendum in 2012 and it is a modern constitution, yet that does not stop us as Syrians meeting with a view to amending or changing it and drafting a new one that will develop our reality and make a positive change to the lives of our people.

Kizbari said that as per the agreement between the Syrian government and UN Special Envoy for Syria Geir Pedersen, any talks held in Geneva and any work that is accomplished is based on the principle of respecting Syria’s sovereignty and territorial integrity, and rejecting all forms of foreign interference in the internal affairs of the Syrian people, affirming that only the Syrian people have the exclusive right to decide the future of the country and choose their socio-economic and political system.

He went on to say that our war against terrorism will continue until every inch of Syrian territories is liberated.

He pointed out that in parallel to Syria’s keenness to make this part of the political track a success, Syria confirms that any presence of any foreign occupying forces on its land or looting of its resources, and the continued imposition of coercive unilateral economic measures will threaten the political track.

He expressed hope that the coming meeting of the committee would be held in Damascus.