The head of the National Coalition calls for countering HTS in the Idleb area, according to Enab Baladi 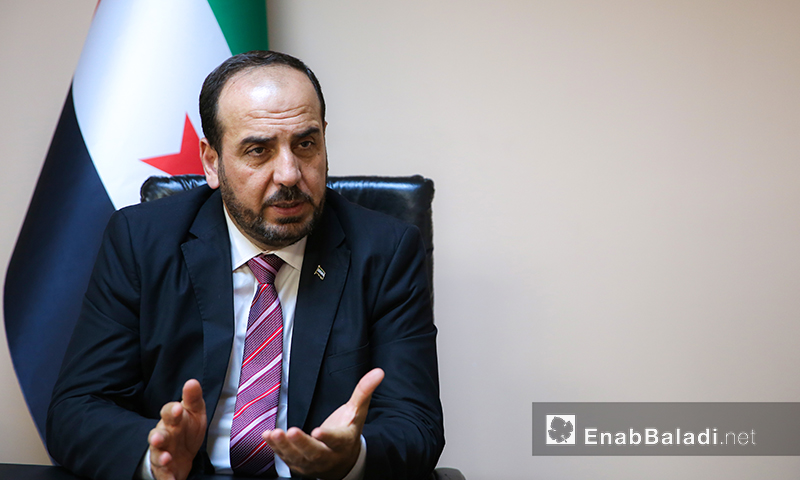 The head of the Negotiations Committee for Revolutionary and Opposition Forces, Nasser al-Hariri, has called for a civilian and military mobilization against Hayat Tahrir al-Sham (HTS) so as not to allow Russia and the regime to use it as a pretext in Idleb province in northeastern Syria.

Hariri spoke at a press conference held in Istanbul on Monday, Sept. 30, to discuss the latest developments in the political process and the Syrian constitutional committee.

Hariri said that the regime and its allies had a clear desire to continue supporting military operations in the area, and use HTS as an excuse to target civilians and infrastructure.

HTS warned against carrying out a military campaign against it in Idleb as part of what it called a “war of rumors broadcast by the criminal regime in liberated areas.”

The group added in a statement that “these rumors are in line with calls by the Russian occupier to keep the main forces active in the Clear Victory operations room out of the military equation in order to disperse the efforts of our honorable people, in concert with our brother revolutionaries.”

Hariri said that, “In Idleb, two monsters are fighting us—the first monster is the Bashar al-Assad regime and its militias and allies. The second monster is Hayat Tahrir al-Sham, or al-Qaeda, or any of its names and symbols.”

He added: “We should not leave the matter of Hayat Tahrir al-Sham in the hands of Russia, which is using it as it wants. The Free Syrian Army present on the ground must cooperate with the countries in the international coalition, in any international formula, in order to rid the area of this organization without allowing the regime, Russia and Iran to advance in this area and carry out crimes.”

There have been reports in recent weeks of the possibility of HTS being dissolved entirely in order to end the “terrorism” excuse that Russia is depending on to carry out its military campaign.

The southern countryside of Idleb at the start of September saw protests against HTS and the Salvation Government affiliated with it, during the truce announced unilaterally by Russia and the regime.

These protests called for bringing down the Syrian regime and also criticized HTS and called for it to leave the cities it controls, and pressured the group and the Salvation Government to dissolve both organizations.