Airstrikes kill a number of civilians in Idleb, the Turkish-US joint operation center set to open, seven members of one family executed in Raqqa and air defenses shoot down suspected Israeli missiles. Catch up on everything that happened over the weekend. 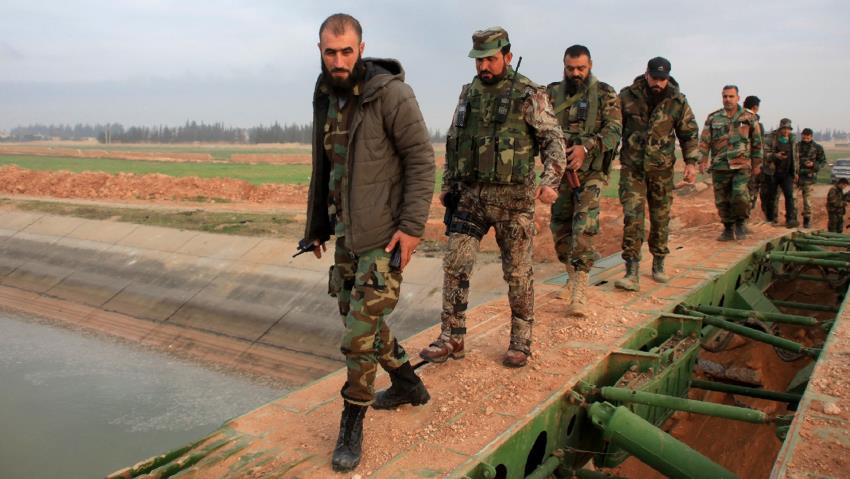 1. Airstrikes have pounded the southern edge of an opposition stronghold in the Syria’s northwest, with one strike killing seven people, including children. The Syrian Observatory for Human Rights said three children were among those killed Saturday in Deir al-Sharqi village in southern Idleb. Increasingly frequent airstrikes and artillery shelling in recent days have raised the number of civilian casualties, as the Syrian regime, backed by Russia, pushes ahead with a months-long offensive on Idleb.

2. On Friday, Turkey announced that a Turkish-US operation center, which will establish and manage a safe zone in northeast Syria, will become operational next week. “The joint operation center will start working with full capacity next week,” Defense Minister Hulusi Akar was quoted as saying by Anadolu News Agency. Akar said that Turkish and US officials have agreed that Syrian Kurdish People Protection Units should be removed from the area and their heavy weapons should be taken. “There has been progress. It marks a good start. There are still things to be done and efforts will continue,” Akar added.

3. On Thursday, Syrian regime troops executed seven members of the same family in a village in northern Syria the Raqqa is Being Slaughtered Silently Facebook page reported. The page said that 20 members of the Assad regime’s elite “Tiger” Forces stormed the village of Jassim al-Nuaimi in western Raqqa province and executed a civilian named Faraj Al-Nuaimi, three of his sons, and three of his nephews.

4. A group of gangsters killed seven people, including a child, after looting their livestock in eastern Raqqa province late on Wednesday, activists said. The twenty assailants, according to Zaman Al Wasl, stormed a small village located in regime-held areas near the city of Tabqa. The victims were tribesmen who work with grazing livestock, according to local activist Muhab al-Hassan.

5. On Friday, two regime soldiers were killed by an armed group in southern Daraa province, local sources said. Zaman Al Wasl reported that the two soldiers, who were operating in the Fourth Armored Division, were killed in the village of al-Nahj near the town of Tal Shihab. No rebel group claimed the responsibility for the attack on the regime army checkpoint. Local activists say that frustration is mounting with regards to the regime’s security policies of arbitrary arrest and isolating the towns with military barriers.

6. On Friday, airstrikes by the Syrian regime and its Russian ally killed 15 civilians, most of them in a camp for the displaced in Idleb province, an activist group said. Four children where among 13 civilians killed in a Russian airstrike on a camp for the displaced near the town of Hass in southern Idleb, said the Syrian Observatory for Human Rights. Two other children were killed in regime air raids in different parts of the region controlled by Syria’s former al-Qaeda affiliate Hay’at Tahrir al-Sham, the group said. The strikes came as regime forces battled Tahrir al-Sham militants and allied rebels in the region, where fierce fighting Friday claimed the lives of 13 loyalists and 18 militants and allied rebels, the Observatory said.

7. Syrian air defenses identified a missile that was fired towards the city of Masyaf near Hama late on Thursday and destroyed it before it hit its target, a Syrian military source said. The missile was fired from the direction of northern Lebanon, the military source added in a statement distributed on a messaging app. The State television had previously reported the sound of a massive blast near Masyaf in Hama province although there were no immediate reports of damage or casualties. According to AFP, spokeswoman for Israel’s military declined to comment on the strike, but Israel has acknowledged repeatedly striking targets inside Syria in recent years. Some attacks Damascus has attributed to Israel have been made from Lebanese airspace.