After five years of torture in Adra Central Prison, Amina al-Mulhim was reunited with her children in the Turkish city of Istanbul reports Zaman Al Wasl. 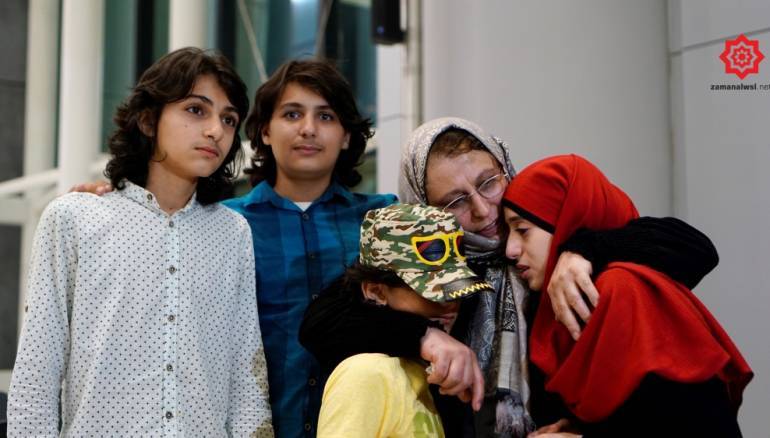 On Friday, Amina al-Mulhim was reunited with her children after five years apart. The family was brought together in Istanbul, where the children were living as refugees.

The partially sighted woman, who uses a wheelchair, was released from Damascus (Adra) Central Prison after five years of physical and psychological torture.

Mulhim, 48, was charged with transporting guns for the rebels of Damascus from the central city of Homs, a charge usually laid against activists and civilians opposed to the Bashar al-Assad’s regime.

The International Conscience Movement says more than 13,500 women have been jailed since the Syrian conflict began, while more than 7,000 women remain in detention, where they are subjected to torture, rape and sexual violence.

The movement is an alliance of individuals, rights groups and organizations aiming to secure urgent action to ensure the release of women and children for the Syrian regime’s prisons, according to the Anadolu Agency.

Local monitoring groups say that more than 500,000 prisoners remain inside the prisons of the Syrian regime.

A report issued by the rights group on Apr. 30, 2019, stated that 14,009 prisoners had been killed due to severe torture inside regime prisons since 2011, according Middle East Monitor.

Syria has been locked in a devastating conflict since early 2011, when the Assad regime cracked down on demonstrators with unexpected severity.

Since then, hundreds of thousands of people have been killed and more than 10 million displaced, according to UN figures, while women and children continue to bear the full brunt of the conflict.