The regime is continuing its brutal assault on northwestern Syria, with 16 civilians killed on Monday, bringing the total to 750 since late April reports Zaman Al Wasl. 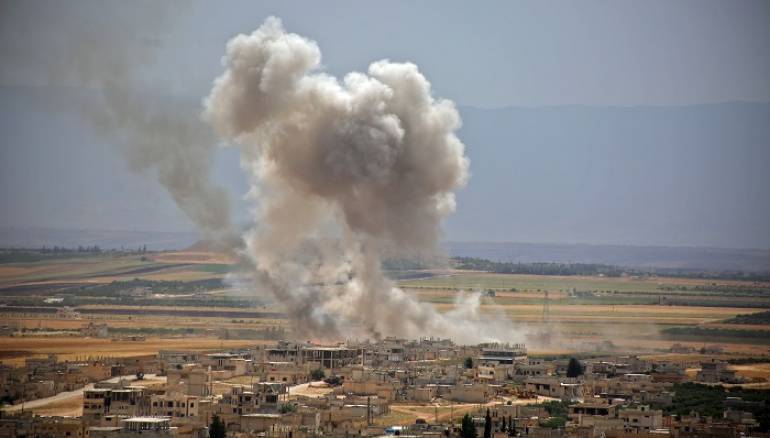 On Monday, regime airstrikes killed a further 16 civilians in northwest Syria, as the total number of people killed in deadly attacks by regime forces and Russia reached 750, with a further 440,000 people displaced since late April.

Six civilians, including a rescuing White Helmets worker, were killed in the town of Kafr Zeita in the northern countryside of Hama, local activists said.

The region is supposed to be protected from a massive regime offensive by a September buffer zone deal, but the area has come under increasing bombardment by the regime and its Russian ally over the past three months.

Rebel fighters captured the villages of al-Jabin and Tel Melah in the northern countryside of Hama in early June during a counter attack against government forces, who have been waging a Russian-backed offensive in the area since late April.

A rebel commander in the area confirmed opposition fighters had withdrawn from al-Jabin after a heavy bombardment.

The pro-regime Al-Watan newspaper said the Syrian army had advanced as Syrian and Russian warplanes targeted militant positions and after several days of preparatory fire.

Ongoing shelling and airstrikes included the use of indiscriminate weapons, such as barrel bombs. The use of these weapons, which are dropped from helicopters, by the Syrian army has been widely documented during the eight-year conflict.

The targeted area is part of the last major foothold of the rebellion against Assad, who has vowed to take back “every inch” of Syria. However, his side has failed to make significant gains during the most recent campaign.

More than 440,000 people have fled the violence in the area over the past three months, according to the United Nations.