The Russian General Staff has accused the US of stealing oil and training terrorist groups in the area, while also holding them responsible for the suffering at the al-Rukban camp writes SANA. 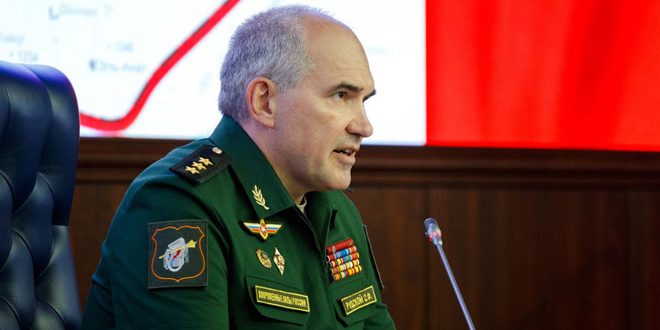 The Russian General Staff said that the US occupation forces are hijacking oil fields and facilities in the Syrian al-Jazeera area, and that they are continuing to train terrorist groups.

In a press conference on Monday, Col. Gen. Sergei Rudskoy, head of the Main Operational Directorate of the Russian General Staff, said that in addition to training militants, US-controlled entities in Syria are hijacking petroleum facilities and oil fields in the Euphrates area.

He added that US private military firms are increasing the number of their personnel at oil sites in the Euphrates, and that they now number over 3,500.

Rudskoy said that these entities are extracting Syrian oil from the al-Omar, Conaco and Tanak oil fields on the Euphrates River’s eastern bank and selling it.

He said that in June and July of this year, the areas around the Euphrates occupied by the US and its coalition witnessed 300 terrorist attacks, which killed 225 people and that the US is responsible for the civilian deaths and suffering at the al-Rukban camp.

Rudskoy also said that Russia has reduced its air operations in Syria to a minimum, and is now focusing on combat training and reconnaissance activities.

On another note, Rudskoy said surveillance shows covert movements and repositioning in the southwestern part of the de-escalation zone in Idleb, with over 500 fighters from Ahrar al-Sham being redeployed as terrorists prepare to carry out attacks.