The southern province of Daraa is witnessing an upsurge in the number of assassinations that are targeting former opposition fighters, although it is unknown who is responsible reports Enab Baladi. 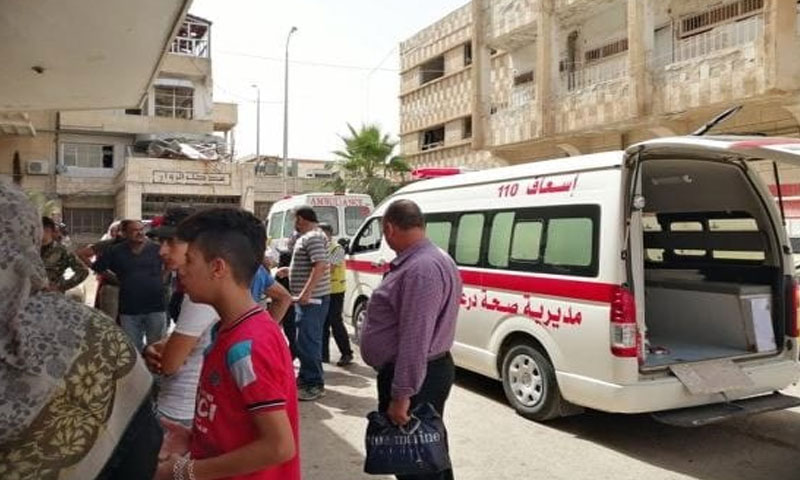 Daraa province witnessed three assassinations carried out by unknown figures and which hit a commander in the Fourth Division and previous opposition fighters.

Enab Baladi’s correspondent in Daraa reported on Thursday, that unknown armed figures assassinated a former opposition commander, who was a commander in the Fourth Division, Firas Abdul Mejid Masalama.

The correspondent said that assassins opened fire in the town of al-Yadoudeh west of Daraa and wounded Shadi al-Ghanem, who was accompanying Masalama and was taken to the National Hospital.

A young man, Mubaraka Moussa Dhiab, was also killed by unknown figures who shot him in the city of al-Sanamayn in northern Daraa, which was preceded by the killing of a fighter in the Fourth Division, Abdullah al-Jaouani, in the town of al-Shajara in the west of the province during night hours.

These three operations were documented by the Samaa channel correspondent, Firas al-Ahmed, on his Facebook page, which attributed them to unknown armed men.

Assassinations have occurred repeatedly across Daraa province and have focused on former commanders and fighters in the opposition after they joined the ranks of Assad’s forces, with the perpetrator of these assassinations still unknown.

The pace of security operations in the region has escalated in the year since the “settlement” agreement, which included the opposition departing with Russian supervision, with the most prominent operations being a bombing that hit a Fourth Division bus and another that hit officers at the rank of colonel on Jul. 17, 2019.

A Russian patrol was previously hit by an explosive device in the eastern countryside of Daraa on Jul. 14, 2019, which was acknowledged by the Russian Reconciliations Center in Syria, attributing it to unknown militants, according to the Sputnik agency.

A statement issued at the start of June by the Martyrs Documentation Office in Daraa said that the assassinations in Daraa were ongoing up to today from the time Assad’s forces took control over the province in August 2018.

The rights office added that it had documented 25 assassinations and attempts which had killed 13 people and wounded nine others, while three had survived them, and no entity had claimed responsibility.

The assassinations have not been limited to military commanders who previously worked with the Syrian opposition, but have also impacted civilians and public figures who are working with service departments in the province.

Daraa province has seen a number of prominent developments since the settlement agreements, most prominently the arrests carried out by regime security branches against fighters previously working with the opposition.