The regime and Russia continue their brutal assault against Idleb province, and the death toll for civilians continues to rise writes Zaman Al Wasl. 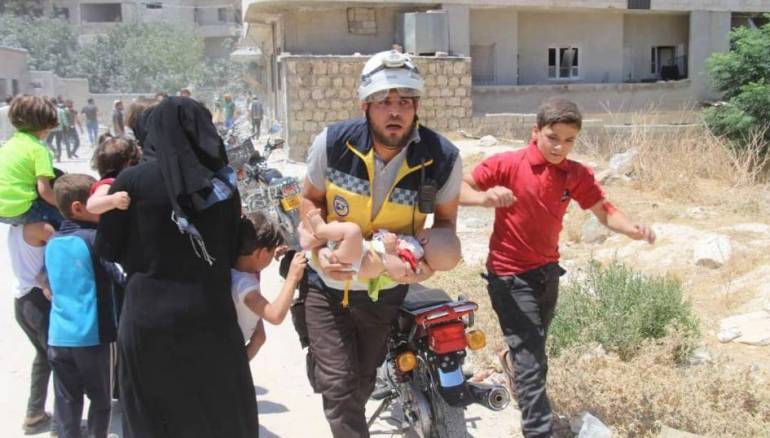 On Wednesday, a mother and her one-year-old baby boy were killed in fresh airstrikes by regime forces and Russia on the northwestern province of Idleb, marking the deadliest offensive on the last rebel stronghold in Syria, the Civil Defense rescuing agency said.

Wednesday’s aerial campaign targeted the town of Ariha, according to Walid Aslan, head of the Civil Defense in town. One more child was killed and 13 more people were wounded, he added.

The Syrian regime and its Russian ally have stepped up their deadly bombardment of the Idleb region and adjacent areas in Aleppo and Hama provinces since late April.

In the past 72 hours at least 60 civilians have been killed. Seven people, including three children, were killed on Tuesday and more than 50 on Monday when Russian warplanes struck a vegetable market and surrounding areas in the town of Maaret al-Numan in Idleb province.

The jihadist-run Idleb region is home to some 3 million people and is supposed to be protected by a months-old international truce.

The spike in violence since late April has killed more than 700 civilians, including more than 170 children, according to the Syrian Observatory for Human Rights.

More than 330,000 people have fled the violence in the area over the past three months, according to the United Nations.

“Today saw one of the deadliest attacks on civilian areas that we have seen since the upsurge in fighting began almost three months ago,” he said in a statement on Monday.