Russia and Syria agreed that the elimination of terrorism is essential to secure safety and stability to ensure the return of refugees reports SANA. 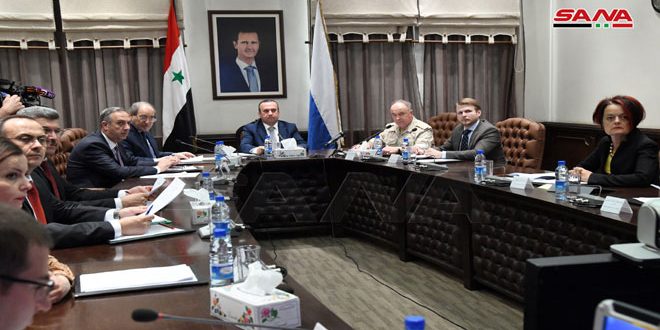 Syrian and Russian Joint Coordination committees on the return of displaced Syrian affirmed that the only solution to the crisis in Syria is to eliminate the remnants of international terrorism and ensure the withdrawal of foreign troops that are illegitimately present in the country.

“Washington and their allies continue to put obstacles in front of Syrian refugees, who left the country because of terrorism, and wish to return to their homes from neighboring countries,” the two committees said in a statement following a periodical meeting at the Local Administration Ministry.

The statement stressed that the illegitimate presence of US troops on Syrian territories is the main reason behind the instability in the region. It welcomed the efforts exerted to implement a plan, in cooperation with representatives of the Syrian Arab Red Crescent, to evacuate the displaced at the al-Rukban camp.

The statement added that the number of displaced who returned via the Syrian-Jordanian borders is continuously increasing, and the increasing number of those who return from Lebanon indicate the effectiveness of procedures taken by the Syrian state to consolidate safety in the country.

The two committees called on the international community to lift the west’s unilateral measures imposed on Syria, which hinder the delivery of humanitarian aid to people in need.