Russian and regime forces have pounded Khan Sheikhoun, Syria decries economic sanctions, the US supportive of Turkey's actions in the north and plans for next round of Astana talks. Catch up on everything that happened over the weekend. 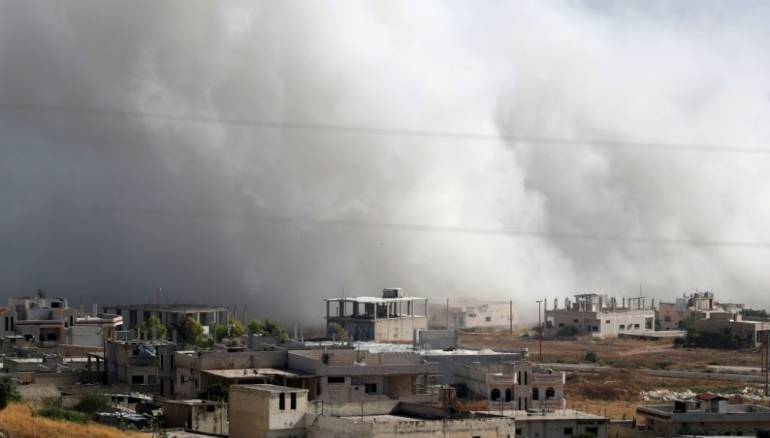 1. Syrian regime forces launched major aerial offensive on the northwestern town of Khan Sheikhoun, carrying out more than 13 raids, senior Civil Defense worker said Saturday. The regime’s fighter jets and helicopters, according to Zaman Al Wasl, have used barrel and cluster bombs that cause huge amounts of damage to the infrastructure of the key town in Idleb province, said Ziad Abboud, head of Civil Defense agency in Khan Sheikhoun. Most of the surrounding towns and villages in the southern countryside of Idleb were also hit by the regime.

2. Syria’s Permanent Representative to the UN Bashar al-Jaafari said the policies of some governments, which are based on imposing unilateral coercive measures on Syria, are hindering the reconstruction process, supporting and financing terrorism and protecting the Israeli occupation in the occupied Syrian Golan and ignoring these actions obstructs the implementation of the Sustainable Development Agenda 2030. Jaafari was quoted by SANA as saying that Syria still believes that empowering people, inclusiveness, equality and reaching sustainable solutions to our daily challenges requires focusing on creating just opportunities through the international and UN approach based building real trust among governments and mutual respect of national sovereignty.

3. The Syrian Observatory for Human Rights said Friday that the fiercest military operation of the Russian and the Syrian regime has entered its 81st day in the de-escalation zone in the western countrysides of Hama and Idleb. The operation has proven to be a failure, despite unlimited Russian support to the regime forces and pro-regime forces under the leadership of Suhail al-Hasan aka the “Tiger”. Also, Russian and Syrian fighter jets conducted 58,000 air and ground strikes but only managed to achieve progress in 20 regions in the Hama and Idleb countrysides. The campaign has displaced around 500,000 Syrian civilians from their houses and regions due to the shelling, and destroyed 19 hospitals and health centers.

4. The US Special Representative for Syria, James Jeffrey, said on Friday that Turkey effectively supported the opposition in Syria in different ways, but Ankara and Washington’s views differed on the US’ role in northeast Syria. Jeffrey was quoted by Turkish Daily Ahval as saying the United States supported Ankara’s position that firstly, the ceasefire in Idleb had to be restored, adding that Washington was pleased that Turkey had been re-enforcing their positions in the province. “Turkey are maintaining a strong position there. They are supporting the opposition in many different ways. I do not want to get into detail, but it is effective,” said Jeffrey, who was speaking at the Aspen Security Forum, said.

5. On Friday, the Kazakh Foreign Ministry said in a statement that the 13th Astana meeting is to be held in Nur-Sultan city and that the guarantor states of Iran, Russia, and Turkey, as well as the Syrian Arab Republic are sending delegations, while an opposition delegation are also planned to participate. The statement indicated that senior representatives from the United Nations, Jordan, Lebanon and Iraq, as observers, will help facilitate the course of the talks. The statement, as appeared on SANA, added that the upcoming Astana meeting will focus on discussing the latest developments in Syria, particularly Idleb and the northeastern area of the country.