The families expressed their happiness at returning to al-Qusair in Homs province, which has had basic services restored writes SANA. 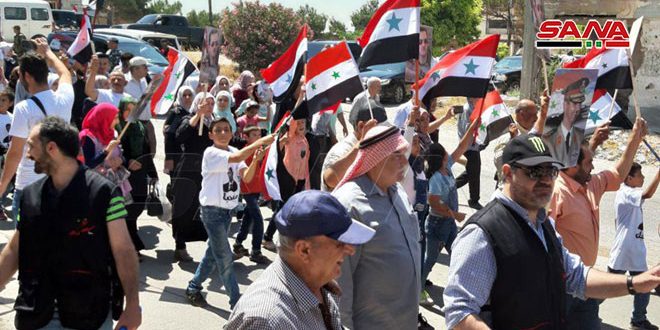 On Sunday, hundreds of displaced families returned to their houses in al-Qusair city in Homs’ western countryside, which had been liberated from terrorism by the Syrian Army.

Speaking to SANA’s reporter the returnees expressed their happiness over the restoration of security and stability to al-Qusair city after the elimination of terrorism thanks to sacrifices and heroism of the Syrian Army.

Homs Governor, Talal al-Barazi, told journalists that the return of the first batch of locals to al-Qusair comes within the state’s plan for the return of the locals to the areas liberated from terrorism just like many areas in Homs province such as Tadmour (Palmyra), al-Houla, and al-Waer neighborhood, with the areas being provided with all basic and logistical supplies and requirements, mainly education and health, in coordination with the administrative units and al-Qusair City Council.

Director of the General Electricity Company of Homs, Musleh al-Hassan said that 35 percent of the work of rehabilitating the electricity network has been achieved in the city and its countryside and the technical workshops are continuing their efforts to ensure a power supply to all the returnees.

Director of Homs Water Resource, Hasan Hmeidan said that water has not been cut off since the liberation of al-Qusair , and a total of 1,100 subscribers of the service have water, referring to the rehabilitation of the damaged network to pump the water to all the returnees.