Syria’s Permanent Representative to the UN reaffirmed Syria’s sovereign right to restore all the occupied Golan during the 41st session of the Human Rights Council writes SANA. 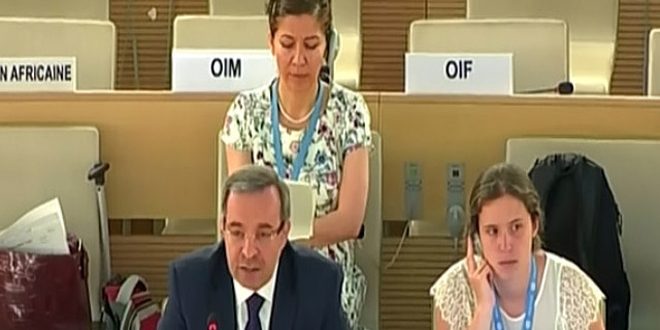 Syria’s Permanent Representative to the UN and other international organizations in Geneva, Ambassador Hussam Eddin Ala said that his government, “condemns in the strongest terms the meeting held by the Israeli occupation Government in the occupied Syrian Golan” which included Israel, Russia and the United States.

Alaa said, “Syria condemns in the strongest terms the meeting of Jun. 16, 2019, and the establishment of a settlement on its land named after US President Donald Trump and its attempts to force the locals in Syrian villages to obtain so-called “Israeli documents” and other arbitrary hostile measures.

He added that Syria asserts that the US pressures to undermine item seven on the agenda of the Human Rights Council, which deals with the violations of the Israeli occupation in the occupied Arab territories reflect flagrant double standards and provide protection for the occupation authorities from accountability for their violations.

He reaffirmed Syria’s sovereign right to restore all the occupied Golan back to the line of Jun. 4, 1967, as inalienable and that it does not fail with the passage of time, asserting Syria’s rejection of all measures taken by the Israeli occupation authorities in the Golan.

Ala’s remarks came through Syria’s statement at the 41st session of the Human Rights Council “Item Seven” on the human rights situation in Palestine and other occupied Arab territories.

“Syria welcomes the council’s discussion of the Israeli occupation authorities’ violations of human rights and international humanitarian law in Palestine and in the occupied Syrian Golan and it underlines the importance of accountability for these violations and that their perpetrators mustn’t escape punishment again,” Ala  said.

He added that the occupation’s continued arbitrary practices and usurpation of lands and properties of the Palestinians and of the people in the occupied Syrian Golan are a flagrant violation of international humanitarian law and UN resolutions.