Fresh satellite images have revealed a huge cemetery inside the Assad Military Academy in Aleppo province, which is believed to hold the remains of 500 people writes Zaman Al Wasl. 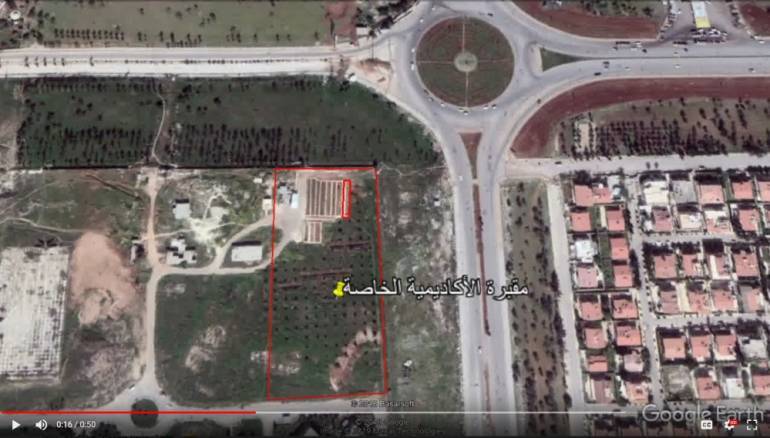 Zaman al-Wasl obtained satellite images and video footage of a cemetery that contains the remains of 500 pro-Shiite fighters within the walls of the Assad Military Academy in Aleppo province.

A well-informed source confirmed that most of the slain fighters were from the Shiite villages of Nubl and al-Zahraa in Aleppo’s countryside. The villages were evacuated in 2018 as part of an Iranian deal with the former al-Qaeda group.

After burying the villagers inside the Assad Academy of Military Engineering, the regime no longer allowed their families to visit the graves except on a few occasions, according to the same source.

The graveyard shows that the regime continues to engage in the sectarian discrimination of Syrians, even after death, manifested by the interest in the dead from areas that provide more human resource and are considered as more loyal.

Bashar al-Assad is attentive of the needs of fellow Alawites fighters and troops from the coastal region, as he tries in various ways to transfer their bodies to their areas, so that they might be buried among their families, whatever the cost, while the bodies of the dead from the mentioned towns are buried in a graveyard behind impregnable military walls.

While the regime buries the rest of its soldiers west of Aleppo, in a cemetery that holds thousands of dead, only hundreds of meters away from the walls of the Academy.

According to the source, the regime has displaced these fighters from their villages and towns to fight alongside its forces on the burning fronts of Aleppo, only for those who are killed to be buried in a cemetery prepared for them inside the walls of the Military Academy based on their sect, so as not to “burden” the regime with returning their corpses to their villages.

The source revealed that burials at the Academy’s cemetery began in 2013, and continued until the siege of Nubl and al-Zahraa in 2016, confirming that it holds the remains of about 500 people from these two towns belonging to one sectarian group. Each line of the graveyard, as shown by the aerial photos, holds about 40 bodies.

Although the cemetery reveals the extent of the losses suffered by Assad forces, this number does not include all the dead from these two towns. Many of the dead who died near their villages were buried in private cemeteries. Not counting the dozens who are still unaccounted for, with families still looking for news about them.

One of the nurses working inside Aleppo military hospital revealed that the bodies inside the graves do not necessarily match the recorded names. In many cases, the regime’s army and security staff used to bury unidentified persons under the names of people who had been confirmed dead, whose bodies were destroyed on the battlefield and it was difficult to identify their features, to avoid the trouble of answering the questions of the deceased families.