Over the past four weeks, the regime and their Russian backers have destroyed over 20 hospitals in an assault that has killed at least 265 civilians reports Al-Araby al-Jadeed. 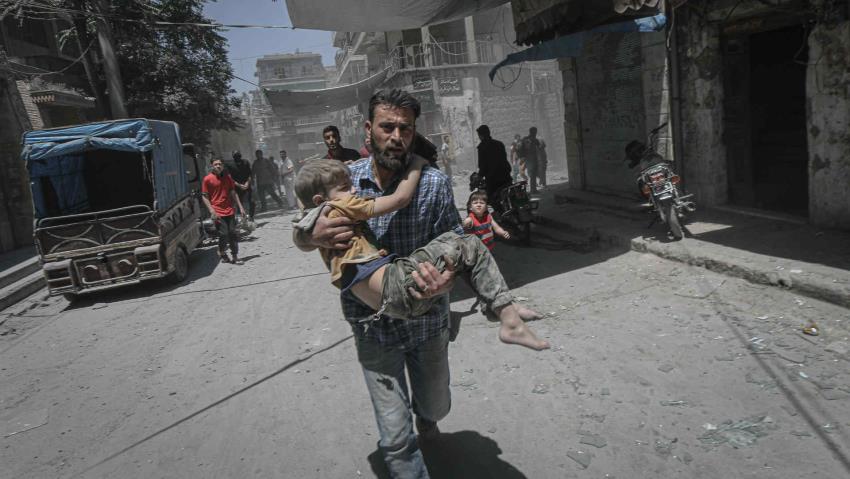 Syrian regime forces and their Russian allies have been accused of deliberately targeting more than 20 hospitals in Idlib in the past four weeks as a joint aerial-ground campaign to retake Syria’s last rebel stronghold continues, according to a report released on Wednesday.

After intensifying its aerial bombardment of the so-called “de-escalation zone” in southern Idlib and northern Hama, the Syrian regime earlier this month began a ground offensive in an attempt to win back the territory village-by-village.

The combined offensive has killed at least 265 civilians and displaced almost 200,000, according to a new report by the Syrian Network for Human Rights (SNHR).

The past four weeks have also seen attacks on “vital civilian facilities” increase in intensity, with 24 hospitals targeted by airstrikes since late April according to the SNHR.

The coordinates of at least six of those hospitals were on a “deconfliction list” prepared by the UN’s humanitarian affairs office (OCHA) and shared with the regime and Russia, Syrian medical officials told The Financial Times.

Four medical personnel have also been killed in the past four weeks.

On Tuesday alone, two hospitals were badly damaged and forced to close by fresh bombing, according to Islamic Relief.

One of those hospitals was a partially-underground facility supported by Islamic Relief, which described the hospital as a major provider of trauma care in the province.

Increasing numbers of civilians are also dying under bombardment, with Tuesday witnessing the deaths of at least 27 people according to the Syrian Observatory for Human Rights (SOHR).

The SNHR says that a deal brokered by Turkey and Russia last year, designed to hold off a feared ground offensive and implement a secure “de-escalation zone” in Syria’s northwest, has only led to escalation attacks on Idlib’s three million civilians.

Of those three million, more than half are refugees who mostly fled regime and Russian bombardment elsewhere in the country during its eight-year civil war.

Since the agreement came into force last September, the SNHR says that at least 701 civilians, including 201 children, have been killed and around a million have been displaced.

During that period, the SNHR has documented at least 39 attacks on medical facilities by Russian and Syrian regime forces.

Idlib is Syria’s last rebel-held territory but is majority controlled by extremist faction Hayat Tahrir al-Sham (HTS), formally the Al-Qaeda-affiliated Jabhat al-Nusra – a fact that has further enabled the Syrian regime to act with impunity.

While the Syrian regime and Russia often claim to be targeting “terrorists”, human rights organisations and activists say it is civilians who are bearing the brunt of the new offensive.

“The world cannot tolerate such monstrous barbarism and relentless assaults on centers providing medical services to the wounded or injured,” Fadel Abdul Ghany, chairman of the SNHR, said in a statement on Wednesday.

The decimation of the already few, makeshift medical facilities in Syria’s northwest comes in tandem with a rising number of injured people as airstrikes increase, with more than 800 injured since late April.

“Every bomb that falls, only acts as a reminder that not only is this tragedy far from over, but that for the three million people in Idlib, things might only get worse,” said Ahmed Mahmoud, Syria country director for Islamic Relief in a statement on Tuesday.

Syria was ranked second in the world for attacks on medical facilities, infrastructure and workers during last year in a report released earlier this month by the Safeguarding Health in Conflict Coalition (SHCC).