Syrian artist Moayed Kanaan uses coffee and a spoon to create his artworks and one day hope to share it with all of Syria and the rest of the world reports SANA. 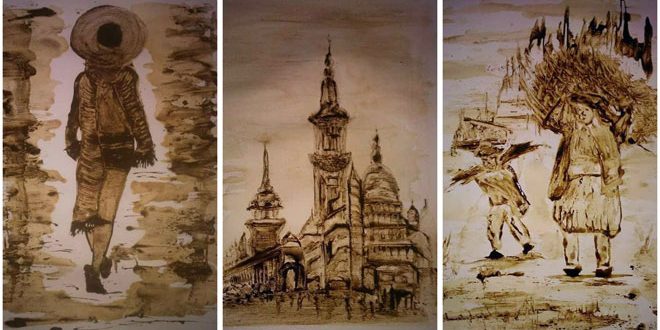 Syrian artist Moayed Kanaan has been able to create his special artistic style of plastic art by turning coffee into wonderful paintings.

Kanaan has been interested in plastic art since early childhood and was influenced by the artworks of international and elite Syrian artists, as he developed a new concept of beauty and documented it with a style that searches for peace and security through the art.

Kanaan considers his initial choice of coffee as temperamental as he didn’t think that he would continue using that medium, yet the admiration that his first artworks gained made him adopt and specializes in that artistic style.

Kanaan mixes the raw material with his artistic and cultural identity, considering that coffee brings tenderness, warmness and affection to the minds of people.

Kanaan noted that his favorite tool for drawing with coffee has been the spoon, but indicating that he might use the brush later, indicating that there are some details that can’t be explained in painting except by using the spoon.

One of the topics which attracts Kanaan as a plastic artist are the limitless possibilities.

Kanaan expressed his hope that he would have the opportunity to display his artistic paintings throughout Syria and around the world.