Dr. Bashar al-Jaafari has accused the US of violating agreements surrounding the non-proliferation of nuclear weapons reports SANA. 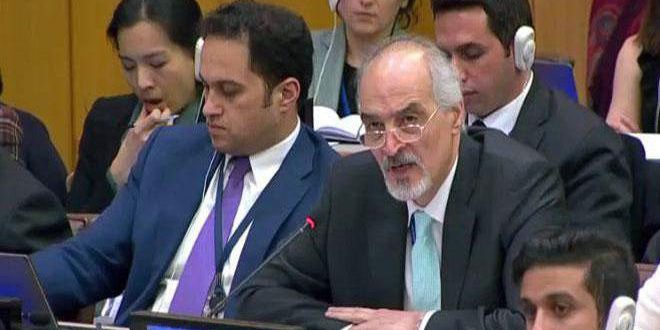 Syria’s permanent representative to the UN, Dr. Bashar al-Jaafari reiterated that Syria believes in the importance of the multilateral work to disarm nuclear weapons, saying that the US violates the Treaty on the Non-Proliferation of Nuclear Weapons and protects the Israeli occupation entity’s breaches in this regard.

He added that some western states helped Israel establish the Negev Nuclear Research Center and offered it substances, experience and nuclear technology, a step that enabled Israel to possess hundreds of nuclear warheads.

As for the site of Deir ez-Zor, Jaafari affirmed that Syria has cooperated with the International Atomic Energy Agency in a positive and constructive way regarding the nature of the Deir ez-Zor site, which was attacked by Israeli warplanes, coming from Turkish airspace.

“My country has also allowed the Agency’s investigators to visit the site in June 2008 and move freely,” Jaafari added.