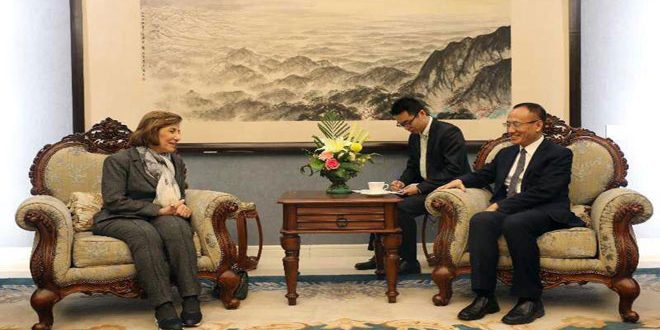 The meeting was held on the sidelines of Second Belt and Road Forum, which is currently being held in Beijing, China.

Shaaban pointed to the strong ties binding the two countries, which share similar ideals and human values and seek to fight terrorism and realize security and safety in the world.

She hailed the support provided by the Chinese government to Syria at different levels.

Shaaban pointed to the importance of Syria’s participation in the Second Belt and Road Forum, which reflects its important contribution to communication among peoples and civilizations.

For his part, the Chinese Assistant Foreign Minister affirmed that his country’s stance towards Syria has not changed and will not change, hailing the continued cooperation between the two countries especially in the fight against terrorism.

He voiced his country’s readiness to continue providing support and assistance to Syria at various levels, hailing the efforts exerted by Syria to make the Astana talks a success.

He also expressed China’s serious willingness to take part in the reconstruction of Syria, asserting that the government has always encouraged Chinese companies to invest in Syria.