Russia, a long time supporter of Syria, said that recent talks will help in the implementation of economic plans and will strengthen the relationship between the two countries reports The Syria Times. 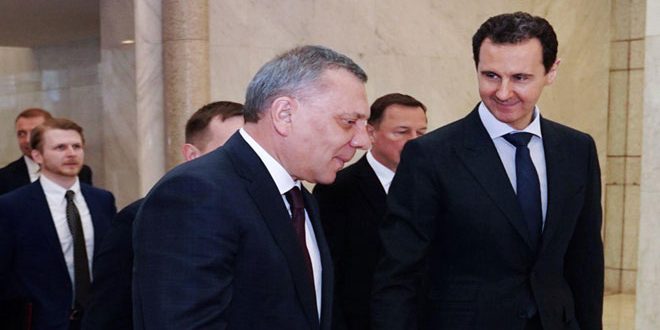 On Saturday, President Bashar al-Assad and Russian Deputy Prime Minister Yori Borisov discussed in a meeting, cooperation between Syria and Russia as well as the agreements signed between the two countries within the framework of the Syrian-Russian Joint Cooperation Committee in the domains of energy, industry and trade.

Borisov, who is the head of the Russian-Syrian joint committee for trade, economic, scientific and technical cooperation, reviewed the phases of implementing the agreements signed between the two countries and the obstacles that delay the completion of the implementation process. He expressed satisfaction over the steps achieved in this regard that further enhance bilateral ties.

President Assad and Borisov discussed mechanisms to eliminate all the obstacles facing cooperation, be they administrative elements or obstacles caused by the sanctions imposed on the Syrian people by their enemies.

Talks also focused on expanding cooperation in new areas to serve the interests of the peoples of the two friendly countries.

Borisov affirmed his country’s determination to support Syria until terrorism is completely eliminated and peace and stability are restored to the entire Syrian territory. He also stressed Russia’s continuous and firm support for the Syrian people in the era of reconstruction.