The Assad regime has been accused of torturing those who have left the al-Rukban Camp after agreeing to reconciliation settlements reports Zaman Al Wasl. 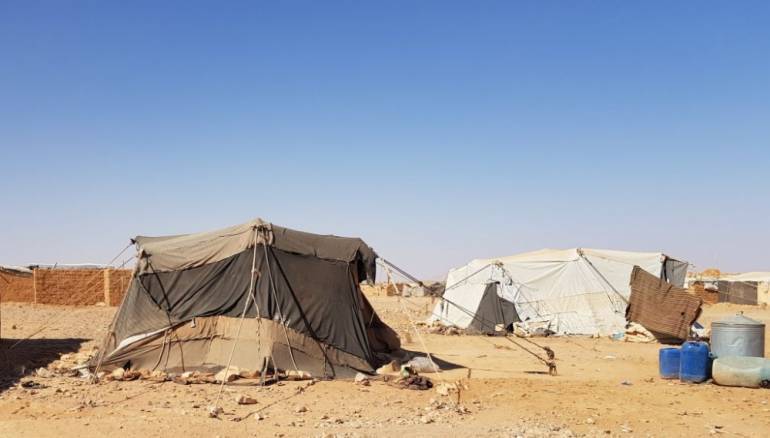 The Commission for Public and Political Relations in the al-Rukban Camp has accused the Syrian regime of turning temporary shelters in central Homs province into a detention and liquidation centre.

The deputy head of the Commission, Shukri al-Shehab, told Zaman al-Wasl that the regime had established three centers in Homs to receive arrivals in the districts of al-Qusour, Deir Ba’alba and Baba Amr, but was not allowing the families to leave these centers, pointing to reports of the torture of returnees, specifically men.

The Syrian regime, with Russian support and coordination, facilitated the evacuation of nearly 3,000 people from the al-Rukban Camp on the Jordanian border to its areas of control, after discussions held by the Russian Reconciliation Center with a delegation from al-Rukban earlier this month.

According to the agreement, the people leaving the camp must go to temporary shelters, to settle their situation through “reconciliations.”

Shehab said that the difficult conditions in the camp, due to the regime’s siege on the al-Tanf area, forced some families to return to areas of regime control without obtaining UN guarantees. According to him, so far only some women and children have left the shelters, after mediation by dignitaries of the city of Homs. Shehab compares the centers to Abu Ghraib prison, adding that as soon as the families arrive, the regime isolates men from women and detains their personal belongings.

As for Russia’s role, Shehab said that according to the few reports received from there, the regime does not carry out torture in the presence of Russian officers in the centers, but, “Russian officers are not present around the clock.”

A special source for the independent outlet Iqtissad, said that the Air Force Intelligence investigates arrivals from the al-Rukban camp, explaining that the majority of the families are from the eastern countryside of Homs, from the city of Palmyra and al-Sukhnah.

Regarding the circumstances of the families living in the shelters, a source in Homs said that there is an emphasis on security in the school centers, highlighting a lack of accurate data on what is going on inside.

The future of the al-Rukban camp, which houses around 40,000 people, is still unclear. It is evident that there is a semi Jordanian-Russian agreement to dismantle the camp, one that the United States, which controls the al-Tanf area, opposes.

A tripartite meeting, between America, Russia and Jordan, will be held in Amman to discuss the fate of the al-Rukban camp.