Spousal homicide in Qamishli, Erdogan vows to solve Syria after elections, residents of the Golan decry Trump and the missing in Raqqa. Catch up on everything that happened over the weekend. 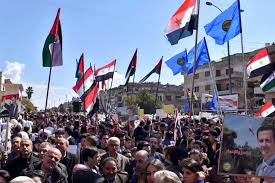 1. Residents of the city of Qamishli were startled by the horrific news of a husband stabbing to death his 19-year-old wife, Helen, with a knife. Al-Ettihad Website reported that the murderer surrendered himself to the al-Asayish (the Kurdish police), leaving behind two children, with nobody who can care for them. His wife’s family had previously fled Qamishli to Iraqi Kurdistan. Women’s and human rights organizations arranged a protest in the city condemning the heinous crime, calling upon the authorities to work to stop domestic violence, violations against women and abuse of their lives.

2. On Saturday, Turkey’s president said that the Syria issue would be solved on the field after Sunday’s local elections in Turkey. “We will definitely solve the Syria issue on the field, if possible, and not on the table. It will be the first task tackled following the elections,” Recep Tayyip Erdogan said at an election rally in Istanbul, according to Anadolu Agency. Erdogan said that those who wish to use Turkey’s southern borders as a terror corridor will never have a chance to do that.

3. The people of the occupied Syrian Golan denounced US President Donald Trump’s declaration about the Golan, saying it is void and meaningless, and asserting that the Golan is an integral part of Syria. In a protest organized on Saturday, in the occupied village of Buqaatha, SANA reported, that the people of the occupied Syrian Golan said Trump’s declaration violates international law and UN resolutions. The participants, who included people from the villages of Buqaatha, Majdal Chams, Masaada, and Ein Qunya, affirmed their adherence to their Syrian identity and to their homeland, and that they will remain in their lands and homes, which the Israeli occupation seeks to seize by force.

4. The Russian Defense Ministry said that Belgian and French intelligence officers have arrived in Idleb province to stage a chemical weapons attack against civilians. “To organize provocations,” the Head of the Russian Defense Ministry’s Center for Syrian Reconciliation, Major General Viktor Kupchishin, said in a statement quoted by SANA, “representatives of the French and Belgian secret services arrived in Idleb.” He added, “Under their supervision, a meeting was held with field commanders from the terrorist groups of Hay’at Tahrir al-Sham and Hurras al-Din, as well as with the representatives of the pseudo-humanitarian organization ‘White Helmets’”.

5. In its latest report released Thursday, The Syrian Network for Human Rights (SNHR) announced that the identification of bodies in mass graves in Raqqa province is an international responsibility, noting that there are nearly 4,247 missing from Raqqa governorate, whose fate needs to be disclosed. The report notes that as people began trickling back to their homes in Raqqa after the defeat and withdrawal of the Islamic State (ISIS) in October 2017, mass graves were found scattered across several areas in Raqqa, prompting the local council in early 2018, several months after the US-backed Syrian Democratic Forces (SDF) took control of the city, to form the initial response team. The 16-page report explains that prior to ISIS seizing control over Raqqa governorate in January 2014, the people of Raqqa used to bury their dead in two main cemeteries in Raqqa city, the ‘Tal al Bay’a’ cemetery and ‘Hittin’ cemetery. Among those who were buried in these cemeteries were the victims of attacks by Syrian Regime forces after the armed opposition forces took control of the area, in addition to the bodies of local people who died naturally.