The Liwa al-Quds militia was stopped in Aleppo by a patrol from the Fourth Division, which led to fighting and caused one known fatality writes Al-Modon. 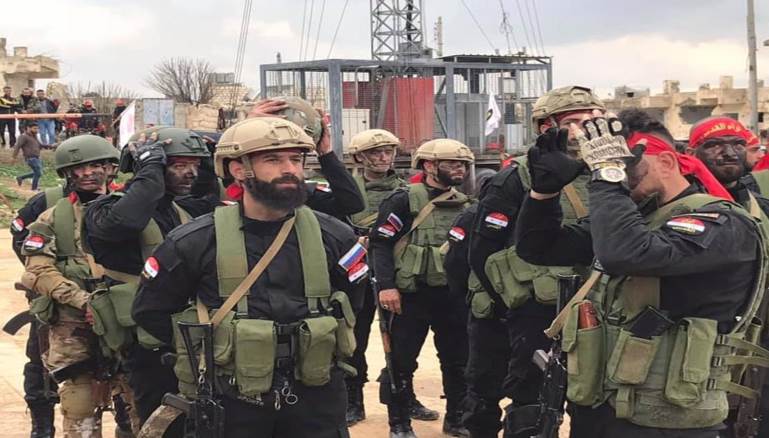 The al-Hamdaniyeh district in western Aleppo has witnessed internal fighting between regime militias, who used heavy and medium machine guns, according to Al-Modon’s correspondent, Khalid al-Khatib.

The clashes lasted a few hours and wounded dozens of people, who were transferred to the Military Hospital in Aleppo. The Hamdaniyeh district and the districts around the Military Academy saw a temporary curfew, followed by searches and arrests, according to Al-Modon’s sources.

The clashes killed a first lieutenant, Awas Deeb, from the Assad Academy for Military Engineering, which is between Hamdaniyeh and New Aleppo. A loyalist media site in Aleppo said that Deeb was wounded while in Hamdaniyeh by accident, after a stray bull hit him in the head. He was transferred to the Military Hospital, where he lost his life shortly after.

A source told Al-Modon that the clashes in Hamdaniyeh and areas close to the Military Academy occurred between groups from the National Defense, Fourth Division, and Liwa al-Baqer militias on one side, and the Liwa al-Quds militia on the other. Confrontations between the two sides began after a Fourth Division patrol intercepted an armed Liwa al-Quds group while they were passing through the neighborhood. The confrontations escalated until reinforcements for both sides arrived from the Military Academy in Hamdaniyeh and from the Artillery Brigade in the al-Zahraa Association area.

According to Al-Modon’s sources, the officer who was killed, Awas Deeb, arrived to the site of the clashes with the reinforcements coming from the Military Academy, and that his death was not an accident.

The western districts of Aleppo have seen deployments by loyalist militias since the beginning of March. The area has seen the increasing expansion and deployment of the Liwa al-Quds militia, which is backed by Russia, at the expense of Iranian-backed militias, which nearly took full controlled the residential blocks and western districts, which have been on the front lines with the armed opposition since the end of 2018.

The Fourth Division, Liwa al-Baqer, and the National Defense comprise a security belt around the Military Academy, which is considered an Iranian observation point, as well as being the biggest military position inside Aleppo for the Revolutionary Guard and the Lebanese group Hezbollah.

Liwa al-Quds has enjoyed major support from Russia since the start of 2019, with hundreds of new recruits joining its ranks who were trained in special facilities in the Handrat Camp north of the city that Russian forces established near the new Russian observation point in Tellet Handrat. Russia has deployed hundreds of new Liwa al-Quds members in the al-Zahraa Association area and on the outskirts north of the New Aleppo district. They have established a central base for them inside the Artillery Brigade near the Russian observation post in al-Zahraa Association area.