Broken regime promises and a continuing deterioration of living conditions in the southern province of Daraa have pushed people to protest writes Human Voice. 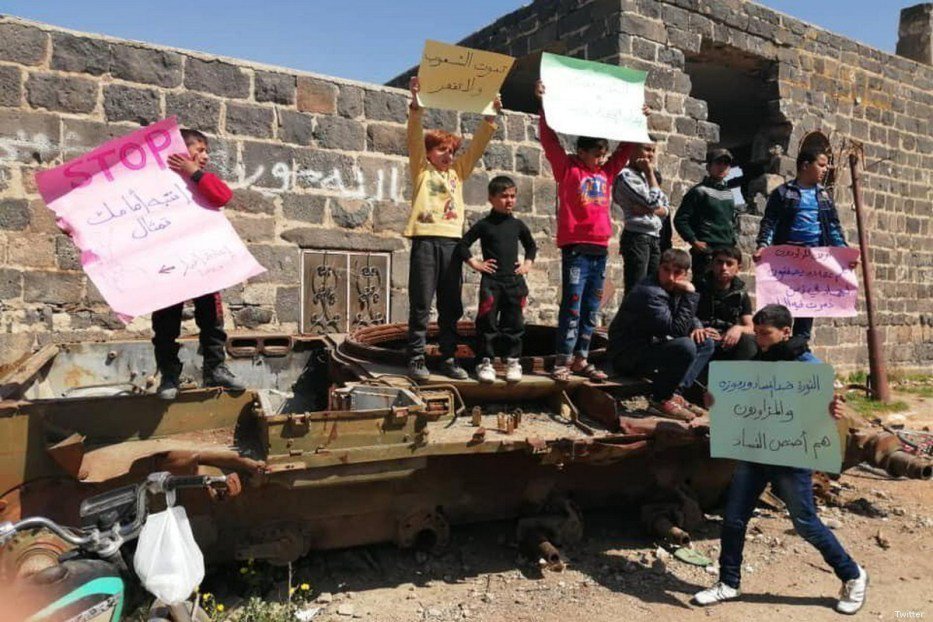 An Assad regime Air Force Intelligence center in Daraa province was attacked, while the revolutionary mobilization against the Syrian regime in the province continues.

Quoting “local sources”, The Horan Free League said, “For the third time in a week, unidentified figures attacked an Air Force Intelligence office in the town of Dael in the central Daraa countryside.”

The sources said that there were clashes with light weapons that lasted for half an hour without any reports of wounded on either side.

On Thursday night, in the town of al-Hirak in the Daraa countryside, unidentified figures burned an image of Bashar al-Assad 12 hours after it was placed near the city’s station, and then its remains were removed during the day.

On Wednesday, a regime agent had placed the image near the station in response to an image of Assad being burned at the city entrance two days earlier.

The Syrian Observatory for Human Rights documented a new assassination, which is part of the escalating security collapse in Daraa province, where unknown gunmen on Mar. 22, 2019, used machine guns to kill a former fighter in the rebel groups of Tel Shehab in the Daraa countryside, who reached a settlement with regime forces, after they took control of the area, and had recently joined the Fourth Division.

The group, which call themselves the “Popular Resistance,” called on young men to join their ranks and to resist the Assad regime, which has broken promises and violated the “settlement and reconciliation” agreements and “forcibly” conscripted young men into the ranks of its army.

The Popular Resistance said in a statement issued on its Facebook page that it would be, “the shield that defends Syrians in all their forms, wherever they are,” and called on young men of Houran to join them.

According to the Popular Resistance statement, this comes as a result of, “the Assad regime breaking promises and carrying out arrests and forcing young men into compulsory and reserve service, and forcing defectors back to service in their ranks, taking advantage of the harshness of the life and the difficult conditions in which people are living.”

The Popular Resistance addressed its statement to the young men across Syria, calling for them to join their ranks to, “drive away oppression from the oppressed and to continue the path to freedom for which blood and bodies were spent.”

The Popular Resistance was formed by a group of young men from Houran in mid-November after the Assad regime’s forces took control of the provinces of Daraa and Quneitra with Russian and Iranian backing, in a fierce military campaign that led to the “displacement and settlement” agreements in the province.