Trump angers residents in the Golan, SDF announces victory over ISIS, a tripartite meeting in Damascus and a high civilian cost reported. Catch up on everything that happened over the weekend. 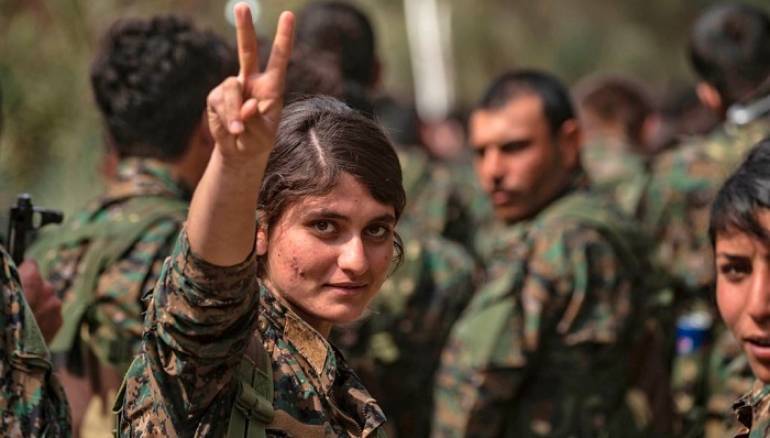 1. On Saturday, Druze men, women and children rallied in the town of Majdal Shams, adjacent to the armistice line between Israeli and Syrian controlled sectors of the Golan Heights. According to AFP, they waved Druze and Syrian flags and carried pictures of Syrian President Bashar al-Assad. Others carried banners in Arabic reading, “The Golan is Syrian” and “We are the ones who decide Golan’s identity”. Wasef Khatar, a Druze community representative, said, “We reject the decision of US President Donald Trump because he is talking about something he doesn’t own,” he said in Arabic.

2. The Syrian Democratic Forces (SDF) declared the “total elimination of [the] so-called caliphate”, Mustafa Bali, head of the SDF media office, wrote on Twitter. “Baghouz has been liberated. The military victory against the Islamic State has been accomplished,” he wrote. The SDF has been battling to capture Baghouz for weeks. After weeks of heavy fighting, the tent camp where the militants made their final stand in the village of Baghouz was bombed to shreds. All that remains is a field pitted by abandoned trenches and bomb craters, littered with scorched tents and the twisted metal carcasses of vehicles.

3. A rare meeting took place in Damascus when the military chiefs of Syria, Iraq and Iran convened there. The meeting, according to The Arab Weekly, and an announcement that a border crossing between Iraq and Syria would be reopened are signs of Iran’s continued influence in the region. In a move that has been widely seen as a boost to Assad, Othman al-Ghanimi, the Iraqi Chief of Staff, announced that the al-Qa’im border crossing between Iraq and Syria would soon be reopened. The crossing, linking Iraq’s Anbar province with Syria’s Deir ez-Zor province, has been closed since 2013. Bagheri hailed the announcement, which has stirred fears among Tehran’s critics of a “land corridor” between Iran and the Mediterranean, passing through Iraq and Syria.

4. On Saturday, the Turkish Ministry of National Defense said it eliminated more than 3,000 Islamic State (ISIS) terrorists and destroyed more than 21,000 ISIS targets, Anadolu News Agency reported. “As the only army that carried out hand-to-hand fighting with ISIS, Turkish Armed Forces neutralized over 3,000 radical terrorists and enabled 320,000 Syrians to return to their homes with Operation Euphrates Shield launched in August 2016,” the Turkish Ministry of National Defense said in a written statement. “Operation Euphrates Shield reached its goal after taking control of the al-Bab settlement, which was achieved on Feb. 24, 2017,” the statement said.

5. More than 630 civilians were killed in the six-month operation against the Islamic State (ISIS) that culminated in its defeat by US-backed Syrian forces Saturday, a monitor said. The civilian dead – among them relatives of ISIS fighters – included 209 children and 157 women, the Syrian Observatory for Human Rights monitoring group said. The Observatory said the operation had cost the lives of more than 750 fighters from the Syrian Democratic Forces, while 1,600 members of ISIS were also killed.