The United States has declared intentions to provide a further five million dollars worth of funding to the Syrian Civil Defense writes The U.S. Department of State. 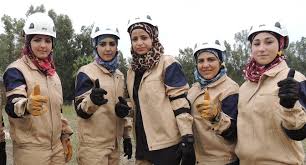 At the direction of the President, subject to congressional approval, the United States intends to provide $5 million for the continuation of the vital, life-saving operations of the White Helmets in Syria and in support of the UN’s International, Impartial and Independent Mechanism (IIIM) which is charged with assisting the investigation and prosecution of persons responsible for the most serious crimes under International Law committed in Syria since March 2011. Today, at the third Brussels Conference on Supporting the Future of Syria and the Region, Special Representative for Syria Engagement and Special Envoy to the Global Coalition to Defeat ISIS Ambassador James Jeffrey publicly announced these contributions. In addition to those made last year, these contributions to the White Helmets and IIIM demonstrate the United States’ commitment and ongoing support for justice and accountability in Syria.

The United States Government strongly supports the work of the White Helmets. They have saved more than 114,000 lives since the conflict began, including victims of Assad’s vicious chemical weapons attacks. With over 2,800 volunteers, they continue to provide search and rescue, emergency response, and early recovery operations helping civilians in areas outside of the control of the regime.

These heroic first responders have the most dangerous job in the world. In addition to operating in an active war zone and in dire humanitarian circumstances, the Syrian regime and Russia deliberately target White Helmets’ centers and volunteers; since 2013 more than 250 White Helmets have been killed—many in so called “double-tap strikes”—and 60 White Helmets’ centers have been damaged or destroyed by Russian and regime airstrikes and the regime. Despite these dangers, the White Helmets provide these services based on strict humanitarian principles and have become a symbol in Syria and world-wide for these courageous values.