A statue of Hafez al-Assad, which was pulled down when protests broke out, has be re-erected in Daraa, angering many local residents reports Hurriya Press. 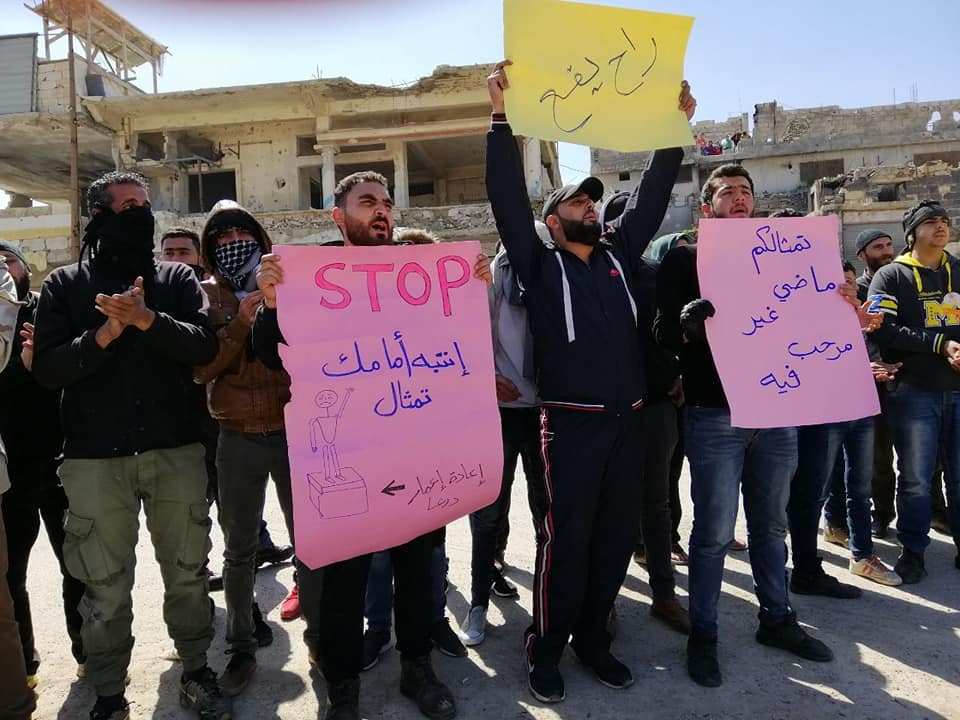 On Sunday, protesters went out in Daraa city in Daraa province in southern Syria calling for the downfall of the Bashar al-Assad regime and rejecting the return of statues of Hafez al-Assad to the province.

Local sources in Daraa told Hurriya Press that, “Hundreds of protesters peacefully demonstrated outside the Omari Mosque in Daraa city, calling for the downfall of the regime and criticizing the return of statues of Hafez al-Assad to the city’s center. They also called for the release of prisoners and for the fates of the missing to be revealed.”

The sources added that, “The protesters headed toward the graves of martyrs who died during bombardments by Assad forces, and renewed their loyalty to the Syrian revolution” and stressed their, “total rejection of re-erecting statues of the great criminal in Daraa’s center.”

The sources noted that, “the protestors shouted chants from the first days of the revolution, such as, ‘long live Syria’ and ‘down with Bashar al-Assad,’ and ‘Daraa is free, free,’ and ‘Syria is ours and not Assad’s house,’ as well as other revolutionary chants of freedom and dignity.”

According to the sources, Daraa center witnessed a mobilization by Assad security forces after unknown figures shot at a pro-regime march that accompanied the erecting of the statue, which led to the march breaking up and the streets clearing, and a state of terror among members of the pro-regime partisan groups.

Daraa city has seen anti-Assad protests since it took control over the city, the most recent of which was a protest in the Omari Mosque square in December, which called for the release of prisoners and criticized the regime for violating the deal signed with rebel groups in the area.