With little access to steady and fruitful employment, life for Syrian refugees living in Lebanon is harsh, and ensuring survival is a constant struggle writes Zaman Al Wasl. 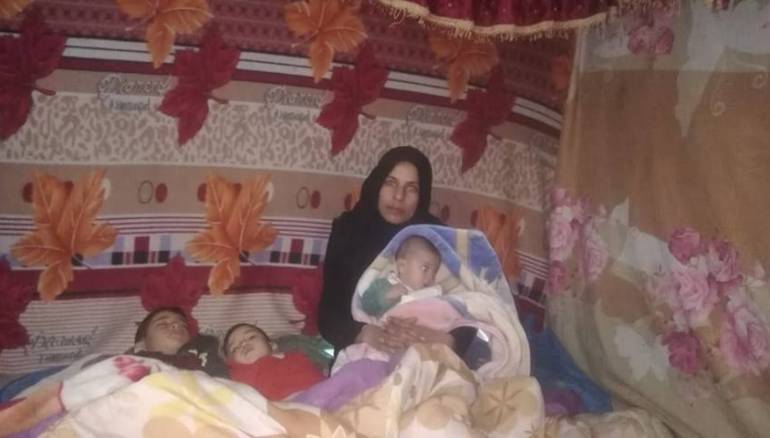 Activists discovered a video online, which shows a camp owner, in the northern Lebanese town of Miniyeh expelling a Syrian refugee family for not paying the 87 dollars needed for the rent.

The distressing video shows Khadija al-Hussein and her three children being ejected from their tent on Tuesday evening, when the weather was freezing and as snow storms rocked the refugee camps.

“There is no place for the poor in this land. No place for mercy,” Hussein said.

“It was 7 pm when the camp’s owner expelled me and my children. He threw us out of my tent because I don’t have the money to pay the rent,” Hussein told to Zaman al-Wasl.

In another video, Hussein appeared for the second time accompanied by the camp owner. He said that Hussein’s husband, who married another woman and abandoned her to live in the camp, is the responsible for what happened.

However, Hussein is still buried in debt. She has no breadwinner for her and her children, and has no financial resource to afford her a decent standard of living.

The crowds with their cameras left, leaving Hussein alone with her dreams of getting a job to protect her and her children.

In the same context, the organizers of Molatqa Ahl al Khayer, or the Forum of the Good People said in a message to Zaman Al Wasl that the Forum will pay the rent after her return to the tent.

The displaced woman received many contacts after the video. Many offered her houses for her family, but she apologized, as she can’t live away from her relatives. So, she returned to the tent.

The refugee appeared in a video in the center of her tent. She thanked the owner of the land who brought her back to the camp. But Hussein blamed the UNHCR.

A UN survey conducted earlier this year said Syrian refugees in Lebanon were becoming poorer and weaker than ever. More than half of all refugees live in extreme poverty and more than three-quarters of them live below the poverty line.

Thousands of Syrians are unable to return because their homes were destroyed by fighting, or because they fear military conscription.