As the fighting winds down in many parts of the country, ministries are starting to assess the cost of reconstruction writes Al-Watan. 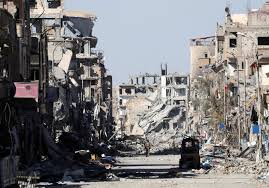 The Minister of Local Administration and Environment, Hussein Makhlouf, said that the government aimed to return every Syrian to his home in a respectable and dignified manner, through the efforts of the entire national team. He said that the ministries had assessed the direct damage to be 8.5 trillion Syrian pounds and 40 trillion pounds of indirect damage.

In a statement to Al-Watan, on the sidelines of a workshop held by the Ministry regarding “material reconstruction strategy and addressing informal areas,” Makhlouf said that major efforts were being made by the government and legislative teams in this respect, based on previous structures, inventories and surveys, with reference to informal housing areas, as well as the announcement of real estate development areas.

The Minister of Public Works and Housing, Suhail Abdel Latif, also announced the beginning of the restoration of infrastructure to the Yarmouk camp and the al-Tadamon district, saying that preliminary steps would be taken, pending the launch of major future projects.