Ambassador Hussam Eddin Ala has said that Syria is taking measures to protect civilians, especially women and children writes SANA. 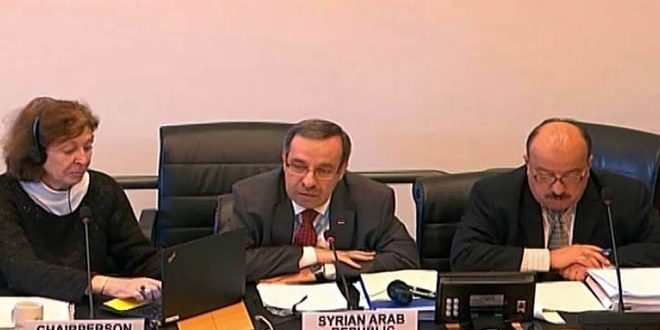 Syria’s Permanent Representative to the UN in Geneva, Ambassador Hussam Eddin Ala, said that the Syrian government, who cares most about the lives of the Syrians, is continuing to take measures to protect them from the crimes of terrorist organizations and deliver humanitarian aid to those who are in need.

Speaking at a Human Rights Council session on the rights of children in Syria on Wednesday, Ala said that the Syrian government has opened safe corridors for the exit of civilians who were used as human shields by terrorist groups. The government has also provided them with temporary housing shelters, and supplied basic needs, in cooperation with NGOs.

Ala indicated that children have always been a top priority, along with women and the elderly and they were allocated special areas inside the temporary housing shelters in order to help them overcome psychological issues, developed while suffering in terrorist-held areas.

Ala said that the Syrian government responded to questions raised in a reports by the Special Representative of the Secretary-General for Children and Armed Conflict and demanded her to give specific information on some of the allegations made in her reports but she has not currently provided any information.

He said that the reports on the situation of children’s rights in Syria ignored the almost daily airstrikes launched by the illegitimate US-led International Coalition, which has claimed the lives of many civilians, including children, and also ignored the victims of the Turkish regime’s aggression, as well as the terrorist groups it supports in north of Syria.

The Ambassador pointed out that the situation in the al-Rukban camp provides another example of the humanitarian suffering, where US-backed terrorist groups dominate the lives of citizens inside the camp while the US, which occupies the area surrounding the camp, prevents humanitarian aid from reaching the civilians there and prevents them from returning to their areas, whose security and stability was restored by the Syrian Arab Army.