The government has announced the rehabilitation of the agriculture sector in Deir ez-Zor and which will positively impact the tens of thousands of returning people writes SANA. 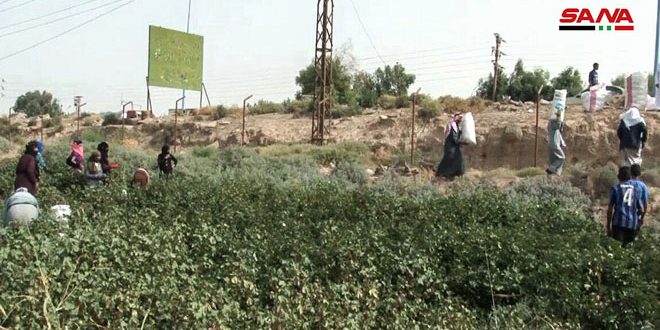 The agricultural sector in Deir ez-Zor province is witnessing a renaissance and the wheel of production has starting running after a hiatus of several years, due to the terrorist attacks which mainly targeted infrastructure and water projects, in parallel with the return of tens of thousands of its inhabitants to their houses and farms.

Agriculture is the citizens’ main source of income and the defeat of Islamic State (ISIS) terrorists, and the restoration of security and stability to almost all of Deir ez-Zor’s areas as well as the governmental support to provide basic living conditions have positively reflected on people and the agricultural sector in general.

Head of Agriculture Directorate in the province, Mahmoud Haiyo, noted that the government has launched a plan to rehabilitate the 3rd section of irrigation projects on the right bank of the Euphrates basin with an estimated worth of two billion Syrian pounds.

He hailed the Syrian army’s sacrifices to lift the siege imposed on the city and liberate large swathes of the province’s countryside. Also noting that 30 agricultural extension units have been put into service after being rehabilitated with the aim of providing consulting services and technical assistance to farmers, not to mention the installation of agricultural pumps in different villages in the eastern countryside of Deir ez-Zor, the distribution of seeds, fertilizers, irrigation water networks, crop protection products, pesticides, veterinary vaccines and grants.