Jabhat al-Nusra were targeted by the Syrian army after the terrorist group breached the demilitarized zone agreement in Idleb reports SANA. 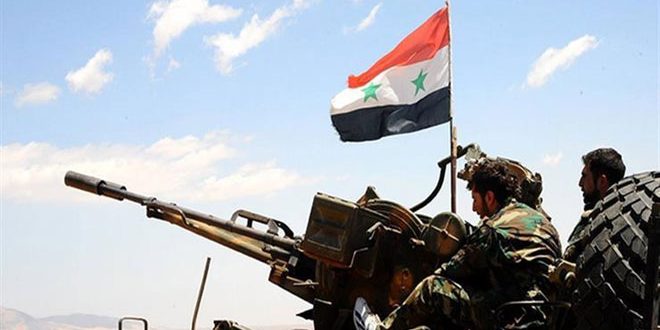 Military units operating in Hama’s northern countryside conducted concentrated strikes against positions and fortifications belonging to terrorist groups, in retaliation to their breaches of the demilitarized zone agreement in Idleb.

SANA’s reporter in Hama said that military units used heavy weapons to target Jabhat al-Nusra on the outskirts of Jarjnaz town in the southeastern countryside of Idleb in retaliation for attacks on military positions, inflicting losses upon them.

Earlier in the day, the reporter said military units used concentrated fire against positions and bastions of terrorists from the so-called Turkistani Party, which embraces hundreds of foreign mercenaries in Qastoun village on the al-Ghab Plain, in Hama’s northwestern countryside.

The reporter added that scores of terrorists were killed in the bombardments and others were injured, in addition to destroying their positions which contain weapons, ammunition and equipment.

On Monday, terrorist groups positioned in al-Latamina town in the northern countryside targeted residential neighborhoods in Mharda city with rocket shells that injured two civilians, in addition to causing material damage to a number of houses.