Thierry Mariani congratulated the Syrian people on their victory against terrorism and stressed the need for sanctions to be lifted reports SANA. 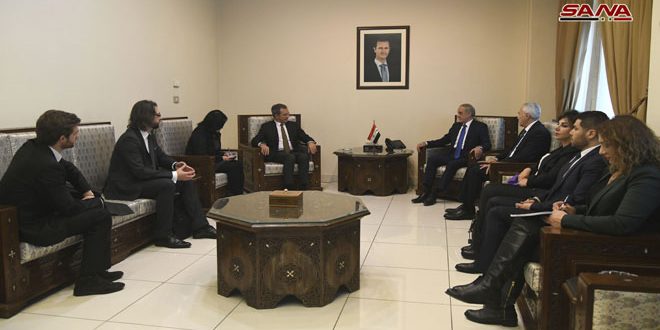 During the meeting, talks focused on the latest developments in Syria and on the regional and European arenas.

Sousan affirmed that the West’s bets against Syria have been undermined thanks to the steadfastness of the Syrian people and their brave armed forces.

He added that the interferences by states, which are conspiring against Syria, have always aimed at complicating the situation and prolonging the crisis to serve the interests of terrorist groups.

Sousan reaffirmed that the great sacrifices by Syrians came in their adherence to Syria’s sovereignty and territorial integrity, and today they are more determined in their adherence to the independence of the national decision and to confront all the attempts to interfere in their affairs and that they consider Syria’s future their exclusive right.

Dr. Sousan noted that the EU lost its independence due to its subordination to US policies and that it has become marginalised in the international arena, and the illegitimate unilateral measures it imposed on Syria have made it a partner in the shedding of Syrian blood and the increase in the people’s suffering.

For his part, Mariani was happy with his trip to Syria, following the victories that have been achieved against terrorist groups, and he expressed confidence and hope that Syria will get out of this ordeal and that security and stability will be restored, and will once again be an example of co-existence that can be followed.

He criticized the policies adopted by the West, which have led to social and economic crises in Syria and to the retreat of the West’s role and effectiveness in the international arena.

Mariani underlined the necessity of the EU adopting a new rapprochement towards the situation in Syria, in light of the current developments, while asserting the necessity of lifting the sanctions imposed on Syria.