The conditions for the 55,000 residents of the al-Rukban camp are dire and the loss of water is adding to their troubles reports Al-Araby al-Jadeed. 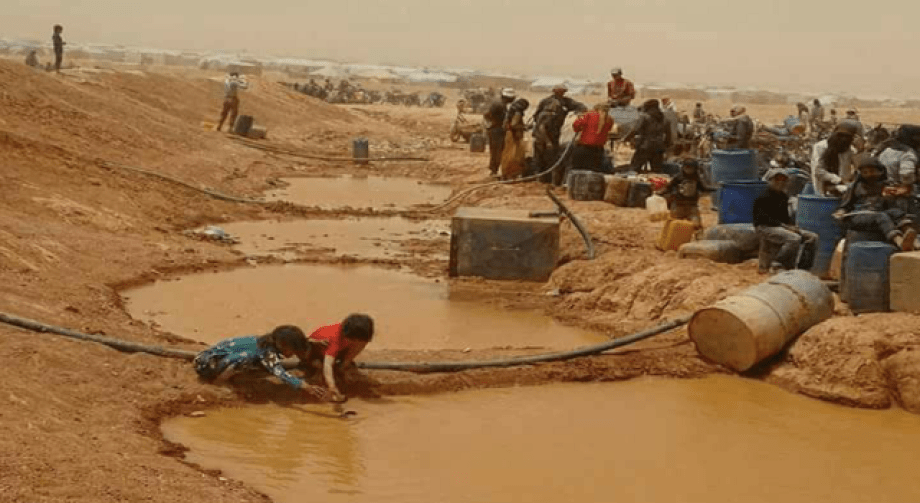 Thousands of displaced Syrians in the al-Rukban desert camp are suffering for a fourth day in a row from a lack of drinking water, with the living and health conditions inside the camp deteriorating, and fears that there will be new victims because of Jordan now not receiving patients in its hospitals.

A media official in the civil administration of the al-Rukban camp, Omar al-Homsi, told Al-Araby Al-Jadeed that, “There has been contact with the Better World foundation, who operate water wells in the camp, and the response was that the lack of the water was due to an outage at the pumps, and that it would be fixed today.”

A member of the Palmyra city coordination council, Khalid Bahaeddin told Al-Araby Al-Jadeed, “There is a water well in an area called al-Dakaka, which is about 30 kilometers from the camp. Local and international organizations have previously promised to operate it, but this hasn’t been done.” He noted that, “This isn’t the first time the pumps at the al-Rukban camp have failed. Sometimes the water will be cut off from the camp as a form of pressure on the residents, to encourage them to accept settlements with the regime.”

Bahaeddin added, “We worked last year to set up water tanks in the camp for emergency situations, but they collapsed during a storm. This year, work began again on two tanks, but they aren’t enough for the 55,000 residents.”

Obtaining drinking water is a real burden for displaced people because of the lack of a network connecting the wells with the distribution points in the camp. Displaced woman Samya Umm Amar told Al-Araby Al-Jadeed that, “The displaced people are enduring daily suffering to obtain water, as everyday they have to go to the border with Jordan to obtain water from the taps there, and this is difficult.”