A report by the Syrian Observatory for Human Rights has said that a former commander from Harasta is now operating as a drug dealer writes Al-Hal. 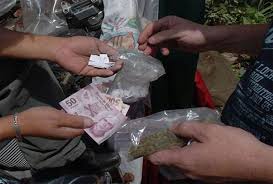 A report by a rights observatory has revealed that a former leader in the Ahrar al-Sham group, who later joined regime forces, currently relies on drug trafficking in “reconciliation and settlement” areas in eastern Ghouta, which are now under Bashar al-Assad’s influence.

The Syrian Observatory for Human Rights said that the former leader of the Security Bureau for Ahrar al-Sham in the city of Harasta, Abou Osama al-Shayab, is “trading and distributing drugs in the cities and towns of eastern Ghouta with facilitation and participation from regime commanders there.”

The Observatory said that Shayab had “settled his status” when the rebel groups in Ghouta surrendered and headed to the north. He is currently leading a local militia in Harasta under the Fourth Division.

The Observatory said in a report issued today, that the man, “had a wide network of dealers, composed of about 100 people, who were former fighters with him in the Fajr al-Umma Brigade within Ahrar al-Sham, who rejected the expulsion and agreed to reconciliations and settlements in eastern Ghouta, and then later became tools for al-Shayab and his shabiha, who trade and sell drugs.”

A former report by the Observatory revealed that militants and security figures in Jaish al-Islam, who had the biggest influence in Ghouta, refused to leave and became “powerful players in the trade of prohibited substances” in the area.

The report said that among the former Jaish al-Islam commanders  involved in the drug trade was Abou Mohamed Naji, who was responsible for the Hisbah in the group, and was the righthand of Abou Abdel Rahman al-Ka’ka’, an important sharia judge in Jaish al-Islam.