In the second ministerial shakeup of the year, President Assad has appointed nine new ministers to the cabinet reports Al-Modon. 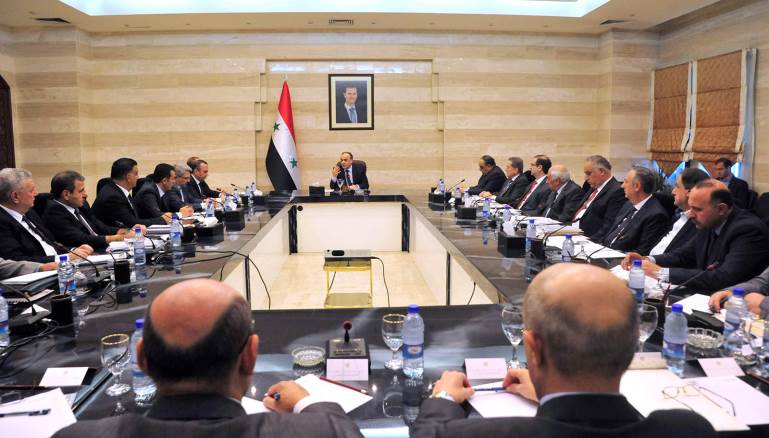 Assad issued a decree to cancel the appointment of Major General Mohamed al-Sha’ar, who had twice survived bombings in Damascus—the first the bombing of the crisis cell meeting in the National Security Building, and a second attack in front of the Interior Ministry that wounded Sha’ar and led him to be transported outside Syria for treatment. Major General Mohamed Rahmoun will take over the Interior Ministry from Sha’ar, who was removed from the post after a reduction of his powers, and a corruption case was opened against the Ministry about two months ago at Russian instruction. Major General Mohamed al-Sha’ar was appointed as the deputy head of the National Progressive Front.

Rahmoun had been head of the Political Security division and before that of the Air Force Intelligence branch in Harasta. He was included on American sanctions lists as one of the Syrian military figures who participated in the bombing of eastern Ghouta with chemical weapons.

Assad appointed Atef Naddaf as Minister for Internal Trade and Consumer Protection following Abdullah al-Gharbi. Gharbi was known as the “Minister of the Poor” for his efforts to fight corruption and control market prices.

Assad appointed Imad Muwwafaq al-Azab as Minister of Education, replacing Hazwan al-Waz. Azab is from Daraya in the Damascus countryside and a former member of its executive committee and a former member of parliament. He was in the ranks of the Baath Party and the Revolutionary Youth Union, and was the President of the National Commission for the Syrian Scientific Olympiad.

Assad also removed the Minister of Tourism Bishr Yaziji and appointed Mohamed Radwan Martineh in his place. Martineh is from Aleppo city and was the head of the Syrian-Russian Business Council and the head of the Tourism Chambers Federation. He was also the former assistant to the Tourism Minister and is considered to be close to Rami Makhlouf. He also headed the Julia Domna tourism company owned by Makhlouf.

Mohamed Eyyad al-Khatib will become Minister of Communications following Ali al-Zafeer. Khatib was previously the Director of the Syria Telecom Damascus branch, and then General Director of Syria Telecom.

In his decree, Bashar canceled the National Reconciliations Ministry entirely and changed it into the “National Reconciliation Agency” which will take Damascus as its headquarters and be affiliated with the premiership. Ali Haidar was appointed as head of the agency after ending his appointment as the Minister.

It had been expected that Foreign Minister Walid al-Muallem would be changed out for health reasons and that Bashar al-Jaafari would take over the posistion. Sources told Al-Modon that Muallem will soon leave his post given the serious collapse of his health, and his transferral to hospital several times over the last few months. The decision to dismiss Muallem may be done separately, given his high-level position and history of service to the regime.