At the conclusion of their visit, Jordanian delegates hailed the reopening of the Nasib Border Crossing and called for increased cooperation reports SANA. 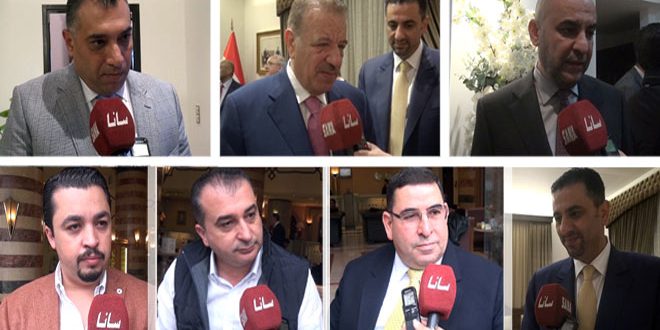 Members of a Jordanian parliamentary delegation said that deep brotherly relations have been binding the people of Syria and Jordan, stressing the desire to enhance these relations to serve the interests of the two countries.

Speaking to SANA at the conclusion of a visit to Damascus, which began on Monday, the members of the Jordanian delegation pointed to the importance of re-opening the Nasib Border Crossing between Syria and Jordan and its positive impact on the exchange of goods and the movement of people.

Head of the delegation, MP Abdul Karim al Doghmi expressed relief over the issues raised during the meetings with Syrian officials and the agreement to form joint committees in order to implement what had been decided, on the ground and overcome any difficulties.

Delegate Nidal Taani MP said that the visit aims to bolster Jordanian–Syrian relations, adding that Syria’s victory is a victory for the Arab nation and it’s thanks to the army, people and the leadership.

For his part, delegate Haitham Ziadin MP said, “We look forward to further cooperation between the two sides, both at the government and the parliamentary levels.”