It is hoped, that by giving control of the border to the regime, any possible Turkish attack will be stopped writes Zaman Al Wasl. 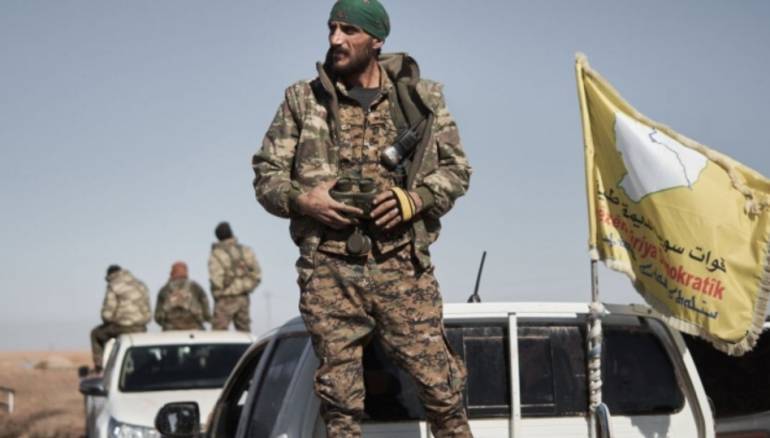 As Turkey prepares for a new offensive to uproot Kurdish militias near the border, the powerful Kurdish Democratic Union Party (PYD) is still trying to mobilize the Arab tribes to join the US-led militias the in northeastern province of Hassakeh.

Most of the key tribal figures who met with Kurdish officials in the border town of Ras al-Ayn this week suggested that the border with Turkey should be handed over to the Syrian regime, to negate the Turkish threat and the state of fear and anticipation in the Kurdish areas.

The Turkish army has launched a wave of attacks across the Syrian border over the past few weeks, ahead of what President Recep Tayyip Erdogan said was an imminent offensive to “destroy the terrorist establishment on the east of the Euphrates”, according to The Independent.

Erdogan vowed to crush Syrian Kurdish fighters, where some 2,000 US soldiers stand alongside the Syrian Democratic Forces (SDF).

The Kurdish-led (SDF), to which Erdogan refers, have been a key ally of the United States in the fight against the Islamic State (ISIS), and control a swathe of northern Syria. But Turkey views the SDF as a terrorist group and has vowed to remove them from the border.

This week, Turkish forces shelled positions in the town of Tal Abyad, in northern Syria, which is under the control of the SDF.

The SDF alliance, which the Kurdish YPG militia spearheads, returned fire and pledged to respond to any more attacks.

Ankara has repeatedly warned it would launch a cross-border offensive east of the Euphrates River in Syria if the US military does not ensure the YPG’s withdrawal.

Washington’s support for the YPG has infuriated Ankara, which sees it as an extension of the outlawed Kurdish PKK movement that has waged an insurgency inside Turkey for decades.

Over the past two years, Turkish forces have swept into parts of Syria to push Kurdish fighters out of their territory west of the Euphrates. Previous offensives halted at the banks of the river, partly to avoid a confrontation with US troops stationed further east.