The incident occurred at a gas station on the outskirts of Damascus, when the soldiers was returning home from a night out writes Syrian Reporter. 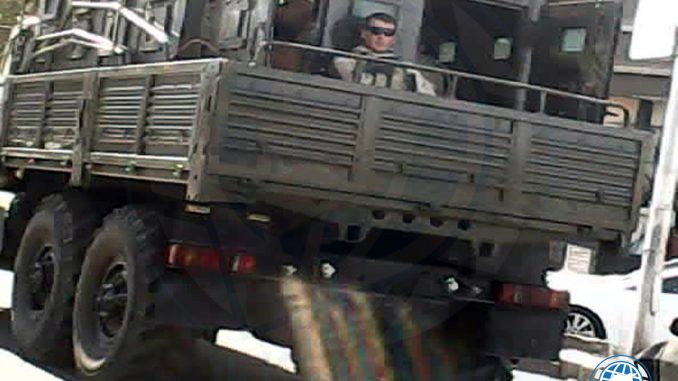 Our reporter in Damascus has said that on Monday, a drunk Russian soldier struck two soldiers from Assad’s gangs in Jaramana, on the outskirts of the capital, amid silence from the fighters at the checkpoint who belonged to Assad’s gangs, approximately 15 meters from the site of the incident.

Our reporter gave details of the incident, saying that it had occurred at a gas station in the city of Jaramana, when the Russian soldier—who had a large physical stature—was returning in a taxi from his night out. After the car entered the gas station, he saw two Assad fighters and believed them to be Muslim Chechen fighters who the Soviet Union previously fought.

The Russian soldier began to scream in the faces of the local fighters and described them as “Muslims and Chechens,” and then struck them both, knocking them to the ground, without the fighters being able to speak or respond to the Russian soldier. Then he began kicking cars and some contents of the gas station.

According to eyewitnesses, some locals called for help from the fighters at the nearest checkpoint, which was a few meters from the incident. However they did not respond, and the fighters only contacted their commanders, who then contacted Russian command. As a result, a large number of officers and fighters from both the Russian and Syrian sides arrived.

The witnesses added that the officers were informed about the details of the incident and shown video recordings from the site, which forced the Russian officers to apologize to the Assad fighters and the Syrian citizens and officers. They said that they would hold the Russian soldier to account for what he did and that he would be removed from service and sent back to his country.

The capital Damascus is filled with checkpoints, some of which are controlled by the Assad army and its security agencies, alongside dozens of checkpoints controlled by loyalist militias and pro-Iranian militias, meaning these checkpoints are divided into sectors—however, none of them dare to infringe on even the smallest Russian soldier passing through.