The Salvation Government, which rejects the Coalition and Interim governments, has adopted a new flag, which bears a similarity to the Saudi flag reports Damas Post. 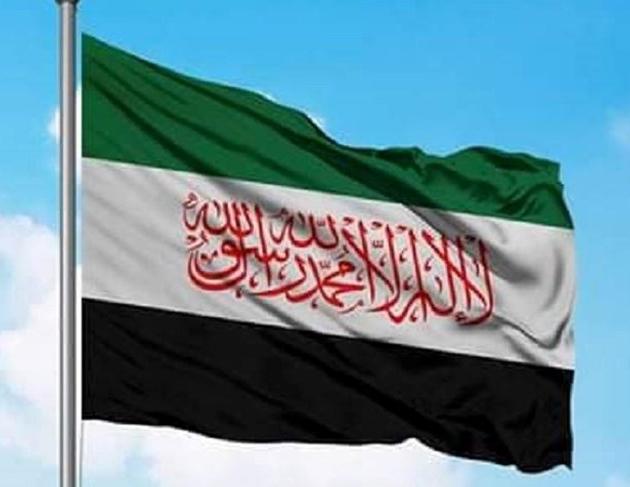 The so-called “Constituent Body for the Syrian General Conference” under the so-called “Salvation Government” issued a decision to change the “opposition flag”, adopted as an official flag for the areas under the control of armed groups in northern Syria, according to the Lebanese Al-Jadeed website.

The decision said: “In accordance with the provisions and regulations of the Constituent Body, and based on its regular meeting, and the requirements of public interest, a single flag and banner are adopted for the ‘liberated’ areas, composed of four colors, with green on top, white in the middle, and black at the base, and written in white and black in the center, the expression, ‘There is no god but God and Mohammad is God’s prophet’ in calligraphy.”

The “Salvation Government” was formed at the end of 2017 by a number of opposition members in northern Syria, presenting itself as a government formed in the areas controlled by armed groups and announcing that it did not recognize the Coalition government or the Interim Government, which were formed abroad and had some offices in areas outside the control of the Syrian state.

The Salvation Government became prominent as the civilian face of the al-Nusra Front terrorist group and as an agency implementing its decisions given that this is the strongest group in Idleb province and in parts of Hama province, despite the denials from the Salvation Government that it was the political arm for any faction on the ground. According to opposition members themselves, it would be impossible to form a government like this without the approval of al-Nusra Front.