The gate, which was out of action for a day, is one of the oldest in Damascus reports Damas Post. 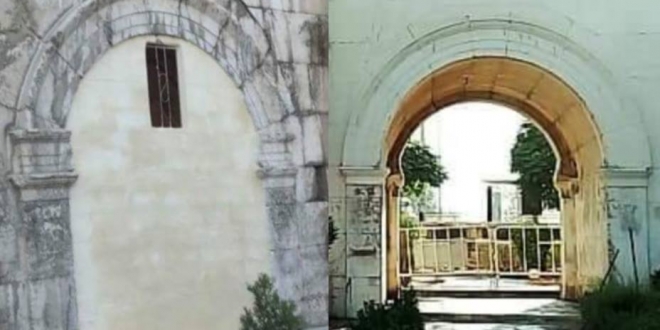 The Damascus governorate swiftly cleared the cement walls that had been set up on Tuesday in Bab Sharqi in Damascus, just one day after they were built.

A wave of anger swept social media after shared images showed the closing of the southern gate to the Bab Sharqi district in Old Damascus with cement walls.

The Old Damascus Director, Haya Hassan, told a local site on Sep. 12, 2018, that the left part of Bab Sharqi was under the authority of National Defense and security agency members. He added that they had taken advantage of the official holiday and set up a room on the outskirts of the Old City, closing off the gate with cement walls.

The wall was met with anger by many Syrians who expressed their shock and displeasure with the closing of a gate which is one of the historical landmarks of Old Damascus. They called on the Tourism Ministry and the Damascus governorate to clarify the reasons for the closure and to hold to account those who wanted to tamper with and sabotage the antiquities of Old Damascus.

The anger led to swift mobilization by the Damascus governorate, which said that work was underway to clear the area and to remove the works around the door, according to the local radio station Sham FM.

The governorate said that it would open an investigation into the circumstances of the incident which occurred due to “individual actions.”

The Tourism Ministry published pictures of the area on its Facebook page showing the wall being removed and the gate being restored, in a step aimed at reducing the anger that dominated social media.

Bab Sharqi is one of the seven gates of Old Damascus and the area, one of the oldest areas in Damascus, is named after it. It includes a number of churches and ancient mosques.