The government is failing to attract significant Chinese interest in the country’s reconstruction, a pro-regime media is reporting 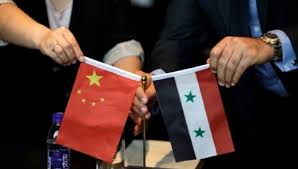 Sources told Al-Ayam that weak banking channels with China were holding up cooperation from the Chinese in a number of sectors.

These sources said that a number of proposals had been submitted and were currently being studied, including a proposal to secure Chinese equipment at a value of 9 billion Syrian pounds. These sources cited as an example the Chinese Exchange Association, from which 18 companies were supposed to make offers, but they were surprised that only two companies did.

Syrian-Chinese cooperation has been discussed since the end of last year, so that rapid construction techniques can be brought in and funding secured, in addition to providing technical support in the fields of renovating and rebuilding infrastructure — especially the recycling of solid waste resulting from the destruction of buildings, as well as clearing rubble and invigorating commercial exchange in building materials, machinery and equipment.

It is worth noting that there was large and clear Chinese-Syrian economic cooperation before the crisis.