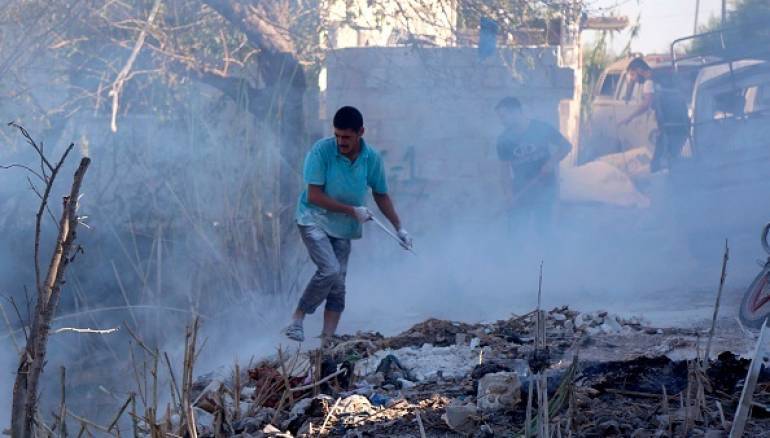 Air raids have pounded areas in Idleb, the final rebel-held province, killing at least 14 civilians and raising further concerns that an all-out regime offensive is only a matter of time.

Tuesday’s strikes came as the United Nations urged Russia, a key ally of Bashar al-Assad, and Turkey, which backs certain rebel groups in Idleb, to help avert a "bloodbath".

A full-scale military offensive would be devastating for the nearly three million people living in the province, including many rebels and civilians who were bussed out of other areas as they came back under regime control.

At least 46 raids – the first in three weeks – hit the area on Tuesday morning.

The bombing mainly targeted the city of Jisr al-Shughour on Idleb's western edge, along with the surrounding towns and villages, activists told Al Jazeera.

The White Helmets said five children, all members of the same family and aged between five and 11, were among those killed.

Other sources put the death toll to at least 17.

On Monday, US President Donald Trump warned Assad and his allies not to "recklessly attack" Idleb, saying hundreds of thousands of people could be killed. Russia, however, dismissed the comments and said the area was a "nest of terrorism".

Activists also said that the latest attacks prompted dozens to flee towards Aleppo on the easten side of Idleb, or towards Turkey, which has had its border with Syria sealed since last year, allowing only for the flow of humanitarian goods.

Shortly before Tuesday's raids, the Kremlin called Idleb a "pocket of terrorism" and said the presence of rebel groups there undermines the possibility of a political settlement to Syria's seven-year war.

"We know that Syria's armed forces are preparing to resolve this problem,” said Dmitry Peskov, Kremlin spokesperson, without commenting on a timeframe for the expected operation.

The Assad regime has recaptured most areas from rebels opposed to his rule, frequently using what Damascus calls "reconciliation" deals under which insurgents agree to give up territory in return for safe passage out, often after intense air and ground campaigns. Assad has repeatedly pledged to take back "every inch" of Syria.