Residents of Daraa have complained that, despite the reconciliation agreements, regime forces are still making life very difficult for them reports Zaman Al Wasl 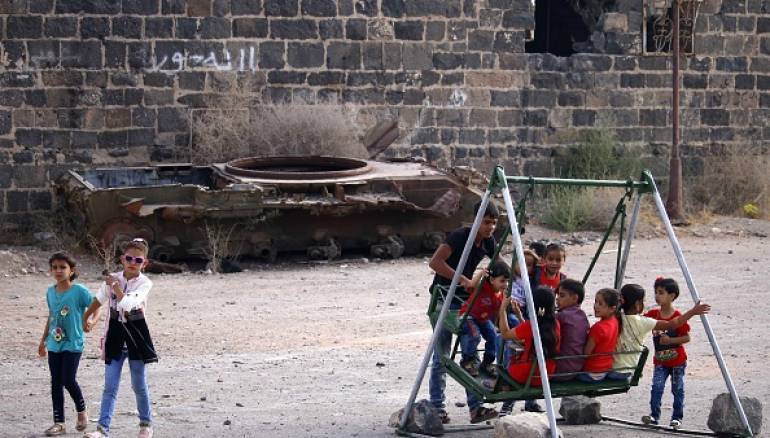 In spite of the period of quietness that overwhemed the southern province of Daraa, due the cessation of hostilities, a spectre of fear has affected everyday activities, and in particular, economic activities.

Abou Qais Al-Hourani, a lawyer, claims that since the province fell under the control of the forces of the regime, the situation became more blurred and harder to predict. Regime forces and its security agents, have not change their attitude towards the citizens under their rule, despite the compromises and reconciliations guaranteed by the Russians, that were agreed to in most of Daraa and the surrounding areas.

Arrests and raids are a daily occurrence all over the province, and Russia, the guarantor of the reconciliation, is making no efforts to intervene. This has resulted in the decline of economic activities and preparations for Eid Al-Adha, which have hindered the natural flow of the daily activities, including the movement, sale and purchase of goods and reconstruction projects.

Abou Mazin, an agricultural engineer and a livestock grower, says that the demand for al-Adha sheeps this year is a humble one, pointing out that there is a great desire among people to offer Al-Idhha sacrifices on this religious occasion, but they do not have the money or the financial liquidity to do so. Rather they are saving the money that they would have spent and prioritizing their daily needs.

The movement of the markets in areas of settlements and reconciliations, which the regime did not enter and did not damage its infrastructure on a large scale, such as Tafas, Daraa, Jassim, Nawa, Ankhil and al-Hara, was an acceptable.

However, movement of the markets is almost non-existent in the areas of rural Daraa Al Aqsa, in the Golan Heights, Tasil and Maariyeh, and slightly better in the countryside of Daraa Al-Sharqi and Saida.

Hundreds of thousands of people have been killed and more than 11 million made homeless in Syria's multi-sided civil war. The regime has made huge territorial gains since Russia joined the fighting on the side of Assad in 2015.