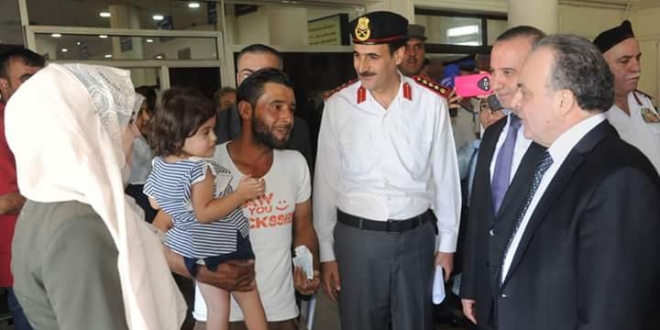 During a visit to a new center in Yabous on the Syrian-Lebanese border, Syrian Prime Minister Imad Khamis reviewed the ongoing preparations to facilitate the return of displaced Syrian citizens from abroad and the easing of the procedures in light of the notable increase in the number of returnees.

Khamis said that the Syrian government had formed a coordination authority for the return of displaced Syrians and that it was communicating with a number of friendly countries in this regard.

The Prime Minister said that the Syrian state was offering the necessary help at border crossings for groups or individuals, while also offering medical services to those who needed it.

Khamis added that the Syrian state was striving to offer help to citizens returning to their mother country of Syria, who had left because of terrorism.

The new Yabous center on the Syrian-Lebanese border is receiving about 10,000 Syrian migrants a day.