American journalist James Foley was abducted towards the end of last November while reporting to AFP on the conflict between Bashar al-Assad’s forces and the rebels in Syria. 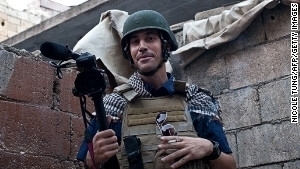 3/1/2013 — The family of an American journalist in Syria announced today their loved one was abducted towards the end of last November while reporting on the conflict between Bashar al-Assad’s forces and the rebels.

James is a professional journalist who until his arrest had worked with Agence France Presse and provided it with videos from the Province of Idleb, northern Syria.

His family believes four armed men abducted Foley along with a fellow journalist. A writer for The Atlantic notes, Foley’s family and employer kept quiet for six weeks, but are now taking a different approach.

Foley’s family asked to keep the news of the abduction secret hoping that that might help efforts to release him. However, the family decided, Wednesday, to make the story public six weeks after the abduction.

"We want Jim to come safely home, or at least we need to speak with him to know he's OK," said the journalist's father, John Foley. "Jim is an objective journalist and we appeal for the release of Jim unharmed. To the people who have Jim, please contact us so we can work together toward his release."

This isn't the first time Foley has been abducted. He was taken along with others in Libya in 2011. He and three other journalists were released by the Libyan military in May 2011.

Foley worked for GlobalPost at the time. The news outlet ran a story on its website Wednesday about Foley's abduction in Syria.