Al-Halqi reviewed the guarantees and procedures taken by the government to provide all requirements needed for the return of the displaced and the affected, as well as those who want to return to the homeland, Syria. 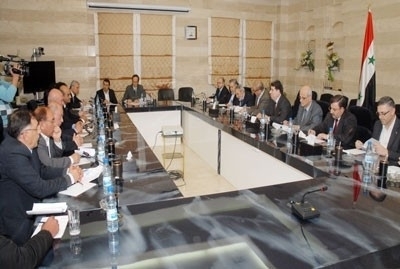 Syria's Prime Minister Wael al-Halqi affirmed that the government is serious in its dealing and openness to dialogue, calling all citizens to engage in the political process and participate in the consultative meetings in light of national firms to boost democracy.
The Ministerial Committee charged with implementing the political program to resolve the crisis, headed by al-Halqi, met on Wednesday a delegation of the Popular Front for Liberation and Change, chaired by Adel Naisa.
Al-Halqi reviewed the guarantees and procedures taken by the government to provide all requirements needed for the return of the displaced and the affected, as well as those who want to return to the homeland, Syria.
"We are real partners in reconstructing the homeland and restoring stability to it.. the government is very serious in shortening phases in order to approximate the date of the dialogue conference," the Premier said.
Members of the delegation presented their opinions and visions to make the political process a success, referring to a number of the crisis reasons and how to tackle with them, condemning the acts of the terrorist groups who attack the properties of private and public sides and strike the national economy.
They pointed out to the suffering of citizens to provide their daily needs and the rise of prices, appreciating the government's procedures to combat corruption, particularly in Dir Ezzor.
"The current events in Syria stress the need for a rapid solution to spare the blood of Syrians," Naisa said in  a statement following the meeting.
He affirmed that the start of dialogue is a big step towards the achievement of the Syrians' aspirations in overcoming the painful situation which all suffer from.